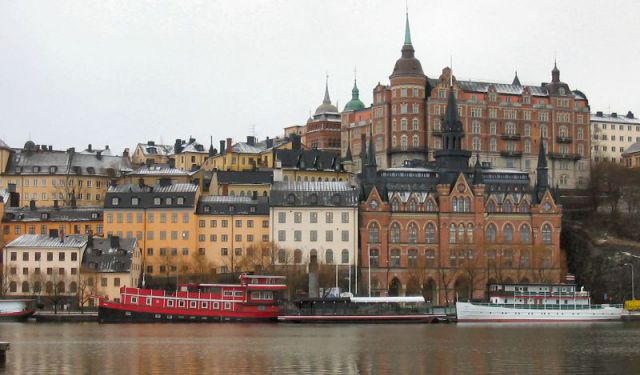 Image by Holger.Ellgaard on Wikimedia under Creative Commons License.

Södermalm, or "Söder" for short, is a borough in central Stockholm, incorporating a large island of the same name (formerly known as "Åsön"). Although considered an island, the water surrounding Södermalm to the north and south does not flow freely, but passes through a series of locks. Visitors are charmed by the borough's narrow, cobbled streets and neat squares, as well as the cute little red cottages - a mixture of working class housing and wealthy dwellings (summer houses and pavilions, including Emanuel Swedenborg's pavilion, originally built here, but later relocated to an open-air museum in Skansen, Stockholm). For anyone wanting to appreciate Stockholm fully, a visit to Södermalm is a must!
How it works: Download the app "GPSmyCity: Walks in 1K+ Cities" from iTunes App Store or Google Play to your mobile phone or tablet. The app turns your mobile device into a personal tour guide and its built-in GPS navigation functions guide you from one tour stop to next. The app works offline, so no data plan is needed when traveling abroad.

The Stockholm City Museum (Swedish: Stadsmuseet i Stockholm) is a museum documenting, preserving and exhibiting the history of Stockholm. The museum is housed in Södra Stadshuset at Slussen on Södermalm. Opened to the public in 1942 it is the largest municipal museum in Sweden and houses collections which include 300,000 items of historical interest; 20,000 works of art and 3 million photographs.

The museum has two permanent exhibitions, one called "The Stockholm Exhibition – Based on a true story". The first part of the Stockholm exhibition was opened in 2010. It tells the history of Stockholm from the first sign of settlements until the future ideas of children. It is all about buildings, streets, parks and water as well as of the inhabitants who fills the city with life. At the exhibition you may also find a unique painting of Stockholm during the 17th century. The second part of "The Stockholm Exhibition" was opened in April 2011. It focuses on the later part of the history of Stockholm. The exhibition takes you to four different locations in Stockholm and tells their story; Slussen, Östermalmstorg, Kungsträdgården and Sergels torg.

The other permanent exhibition is "About houses – Architecture & building preservation in Stockholm". The exhibition guides the visitor through different historical building styles and show examples from the end of last century until the 1970s. Among kitchen cabinets, wallpapers and door handles, you get knowledge of that which is typical of the times and in many cases worthy of preservation. A house with historical value is something to be proud of and worth taking care of for the future!

The model of the planet Mercury on the yard of the museum is part of the Sweden Solar System – the largest model of the solar system in the world.

The museum has a cafe and a shop, and during the summertime events such as dance evenings are held.


Image by Holger.Ellgaard on Wikimedia under Creative Commons License.
Sight description based on wikipedia
2

The Swedish Printmakers Association, (Grafiska Sällskapet) displays a large collection of contemporary Swedish prints, which is regularly updated by association members. The Swedish Printmakers Association, established in 1910, has about 450 members today, with varying styles and techniques. The prints are also for sale and the staff is available to assist you with professional advice.

Galleri Blås & Knåda offers a large selection of contemporary Swedish ceramics and glass, as well as works of art. Established in 1975, all items on display and for sale are made by a society of about 45 potters and glassblowers from all over Sweden.

Located in the center of Stockholm, the Maria Magdelena Church has a history which goes back as far as the 14th century. King Magnus Eriksson built a funeral chapel on the site which was dedicated to Mary Magdalene. The chapel was torn down with the introduction of Protestantism in the 16th century only to be rebuilt in 1577 by King John III. Designed in Baroque style of architecture, the spire was destroyed by fire in 1759 along with most of the neighborhood. The church, once again, was rebuilt in 1763 with care given to preserving the church’s original appearance. Visitors come from all around to see the painting at the High Altar which depicts the Adoration of the Shepherd at the Nativity by Louis Masreliez. The pulpit is encrusted with an elegant medallion with a portrait of Mary Magdelene. The church houses three organs, one which has been there since 1774 and designed by Carl Fredrik Adelcrantz, a second 50-stop organ which was added in 1927 and a smaller organ which was added to the choir in 1986. The fabulous baptismal font, which is made of rich copper, dates back to the 1600s and has managed to survive both fires and rebuilds.
Image by Arild Vågen on Wikimedia under Creative Commons License.
Sight description based on wikipedia
5

Built on the site of the famous Stockholm Bloodbath, Katarina Kyrka is a church with a long history which began in the 1600s. This church is one of the most known churches in Stockholm. Destroyed by fire two times during its lifetime, the church has been rebuilt as recently as the 1990s. Named after the mother of King Charles X of Sweden, Princess Catherine, it took many years to build this facility as funding was a challenge for its patron. The church reflects the stylistic design of three architects. Jean de la Vallée was the original architect, in 1723 Göran Josua Adelcrantz designed the octagonal tower and the reconstruction following the first fire and, Ove Hidemark oversaw the reconstruction in 1990 when all but the exterior walls burned to the ground. The last reconstruction took many painstaking years, as care was taken to make sure the church was replicated and restored to its original 17th century appearance using materials common to the time period. Visitors will want to come by at noon on Tuesday or Thursday, when organ music can be heard coming from within the religious facility. The church is open for visitors Monday through Friday 10 a.m. to 5 p.m. and, on the weekend 11 a.m. to 5 p.m.
Image by Arild Vågen on Wikimedia under Creative Commons License.
Sight description based on wikipedia
6

Fotografiska (The Swedish Museum of Photography) is a centre for contemporary photography in the Södermalm district of Stockholm, Sweden that opened on 21 May 2010.
Fotografiska has 5500 m2 of exhibition spaces, an academy, bistro, café, bar, conference rooms, museum shop, gallery, and event spaces.

Fotografiska is housed at Stadsgården, in a former customs house in the Art Nouveau style dating from 1906. Designed by Ferdinand Boberg, the building is listed as of cultural interest. The original brick facade is intact, while the interiors have been renovated to house the centre.
Image by Julian Herzog on Wikimedia under Creative Commons License.
Sight description based on wikipedia
7

jällgatan is a street by the Kronan block on Södermalm in Stockholm . It stretches on Stigberget between Renstiernas gata in the west and Erstagatan in the east. The street is 27.8 meters above Saltsjön and is known for the beautiful view over Stockholm's inlet and the city's most central parts. As early as 1913, politician Anna Lindhagen motioned that the area south of Fjällgatan should become a cultural reserve and be saved for the afterlife. However, the decision first came in 1956, long after her death.

***
The Stockholmers love their Fjällgatan. They call the vantage point affectionately their “balcony”. From here you can look at Gamla Stan, the museum island of Skeppsholmen, and the island of Djurgården, the most visited tourist destination in Stockholm. At the northwestern end of the viewing platform is a café with a sun room. Here you can enjoy the view even if the weather is windy or rainy. The blocks around Fjällgatan, Stigbergsgatan, Mäster Mikaels Gata, Fiskargatan, and Södra Teatern are lined with well-preserved wooden buildings from the 1700s on one side and a magnificent view of the other.
***PH****

At Fjällgatan 37, where the summer café Fjällgatans Kafféstuga is located, is a former dormitory built in 1872 on the initiative of the cereal wholesaler CH Matton following drawings by architect Axel Kumlien . The goods were weighed in the courthouse and transported on a "rolling road" (a kind of transport track) down to Matton's huge warehouse building at Stadsgårdshamnen , which at that time was not navigable by horse and carriage. Via a long staircase (then the last Styvern's stairs ) adjacent to the warehouse building, you could get between Fjällgatan and Stadsgården.

Matton's cereal warehouse was demolished when Stadsgården was redeveloped around the turn of the 1900. When the new Stadsgård quay was completed in 1912, the dormitory was no longer needed and became Pomril's soft drink service . The daredevil's yellow-plastered stone building still remains. It is supplemented with toilets, garbage rooms and summer verandas and is part of today's Fjällgatan coffee house operated by the same family since 1968.
Image by Holger.Ellgaard on Wikimedia under Creative Commons License.
Sight description based on wikipedia

Once an independent city, Norrmalm has been a part of Stockholm (one of its central areas, these days) since 1635. Many of Norrmalm's old buildings were torn down during the 1950s-60s to clear space for modern construction. Still, the most notable pieces of local architecture are in place and reveal a wide range of styles - Late Gothic, Renaissance, Baroque. Among the many places of interest...  view more

Gamla stan (The Old Town) is the oldest part of Stockholm, officially known until 1980 as “The Town Between Bridges” (Staden mellan broarna). Established in the 13th century, the area abounds in medieval alleyways, cobbled streets, and archaic architecture, showing a great deal of North German influence. There are quite a few historic sights in the area, including The Royal Palace, The Royal...  view more