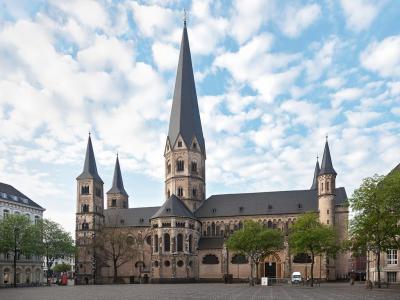 The Bonn Minster (German: Das Bonner Münster) is one of Germany's oldest churches, having been built between the 11th and 13th centuries. At one point the church served as the cathedral for the Archbishopric of Cologne. However, the Minster is now a Papal basilica.

Originally the Minster was the collegiate church of Saints Cassius and Florentius, who were Roman legionaries of the legendary all-Christian Theban Legion. The legion's garrison, according to legend, was in the Egyptian town of Thebes. Roman Emperor Maximianus Herculius ordered the legion to march to Gaul and assist in subduing rebels from Burgundy. At some point during their march, the legion refused to follow the emperor's orders either to kill fellow Christians or to worship Maximianus Herculius as a god. As a result, a large number of legionaries were martyred in Agaunum, now named Saint Maurice-en-Valais after Saint Maurice. According to legend, Saints Cassius and Florentius, who were under the command of Saint Gereon, were beheaded for their religious beliefs at the present location of the Bonn Minster.
Image by Qualle on Wikimedia under Creative Commons License.
Sight description based on wikipedia