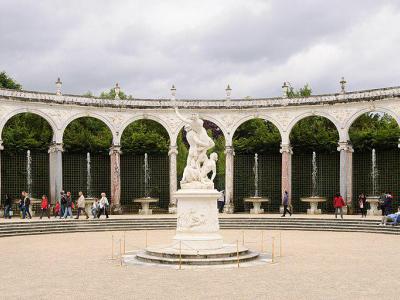 Like many areas of the garden, this section has seen a number of revisions. Designed as a simple green area by Le Nôtre in 1678, the landscape architect used an existing stream to create a bosquet that featured rivulets that twisted among nine islets. In 1684, Jules Hardouin-Mansart completely redesigned the bosquet by constructing a circular arched double colonnade. The Colonnade, as the area was renamed, had 32 arches and 31fountains. In 1704, three additional entrances were added and three fountains were taken out. The statue that currently occupies the center of the Colonnade – the Abduction of Persephone – was set in place in 1696.
Image by Urban on Wikimedia under Creative Commons License.
Sight description based on wikipedia