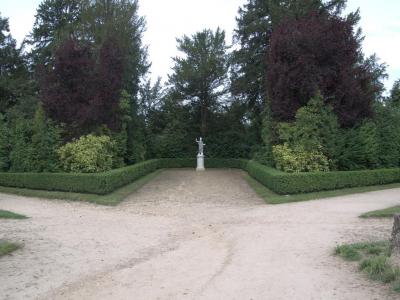 This part of the garden has a long and complex history. In 1665, André Le Nôtre planned a maze of unadorned paths in an area south of the Latona Fountain near the Orangerie. In 1669, writer Charles Perrault advised Louis XIV to remodel the Labyrinth in such a way as to serve the Dauphin’s education. Between 1672 and 1677 Le Nôtre redesigned the area to incorporate 39 fountains that depicted stories from Aesop’s Fables, with story plaques that helped Louis XIV’s son learn to read. By the time it was finished the Labyrinth had 333 painted metal animal sculptures. This lasted about a century until, citing repair and maintenance costs, Louis XVI ordered the Labyrinth destroyed in 1778. In its place, an arboretum of exotic trees was planted as an English-styled garden. Rechristened the Bosquet de la Reine, it was in this part of the garden that the famous episode known as the Affair of the Diamond Necklace transpired in 1785.
Image by DaffyDuke on Flickr under Creative Commons License.
Sight description based on wikipedia