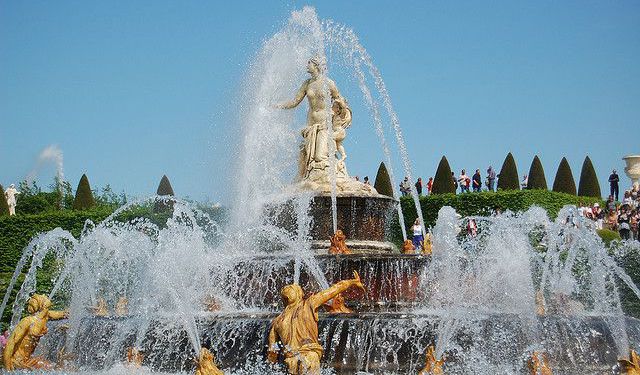 Besides its many wonderful plants and trees landscaped into amazing patterns, the gardens at the Royal Palace of Versailles have another key ingredient: water. The marvelous fountains and other fantastic water features here only serve to underline the magnificent beauty of the whole complex. Take our tour to see the best water features in the royal gardens.
Image Courtesy of Flickr and edwin.11.
How it works: Download the app "GPSmyCity: Walks in 1K+ Cities" from iTunes App Store or Google Play to your mobile phone or tablet. The app turns your mobile device into a personal tour guide and its built-in GPS navigation functions guide you from one tour stop to next. The app works offline, so no data plan is needed when traveling abroad.

The buildings and gardens of Versailles are beautiful and diverse. The Orangerie is one of the finest examples of the whims of the kings of France.

King Louis 14th transformed the hunting lodge used by his grandfather Louis 13th, into the magnificent Palace of Versailles during three separate building campaigns. One of the first buildings to be completely finished was the Orangerie, built between 1684 and 1686, by the king’s favorite architect Jules Hardouin Mansart.

The building consists of a central gallery, 150 metres long and 21 metres wide with a high vaulted ceiling and tall arched windows facing the south for maximum sunlight. This gallery has two lateral galleries 117 metres long, which are under the famous “Cent Marches” stairway.

The gardens are spread around a central pond with a fountain. Around the pond are walkways and four lawns that are laid out in geometrical patterns. From May to October plants are brought out from the buildings and set out in large square tubs lining the paths.

Some of these plants and trees are over 200 years old and every year they are laden with fruit or flowers. You can admire Oleanders with their crêpe-paper red, pink and white blossoms, slender palms and orange, lemon and pomegranate trees from Italy, Spain and Portugal.


Image Courtesy of Wikimedia and Urban.
2

The gardens of Versailles are full of water features and one of the most famous is the Bassin de Latone.

It was designed by the famous landscape gardener André le Notre and built in 1670. The magnificent central fountain was sculpted by Gaspard and Balthazar Marsy.

The fountain looks a little like a wedding cake with its four tiers and centre figures. However, instead of the bride and groom you find on top of a wedding cake, the main statues represent the goddess Latone and her two children Apollo and Diana. On the three other tiers are statues of men and women, frogs, lizards and turtles.

According to Roman mythology, the goddess Latone fell in love with Jupiter. Hearing that she was pregnant, Juno – Jupiter’s wife – chased Latone from heaven. On earth the unfortunate goddess gave birth to her twins, but when she went to wash them and drink from a fountain in Lycia, the people refused to let her approach the water.

Latone cried out to Jupiter, who punished the people by turning them into frogs, lizards and turtles. Ovid mentions this legend in his famous work “Metamorphoses”, which inspired the Marsy brothers in their creation.

The fountain is an incredible example of 17th century hydraulics but over the centuries it is inevitably falling into ruin. A recent restoration program has been launched, with repairs estimated at about 7 million Euros.
Image Courtesy of Wikimedia and Lionel Allorge.
3

The most amazing feature of Versailles is, of course, the numerous fountains, ponds and lakes, especially when you think that the water was pumped up from the Seine using ingenious 17th century technology. One of the most popular of these waterways is the Parterre d’Eau.

The Parterre is a terrace between the Chateau and the gardens. It has two huge rectangular ponds – hence its name. Planning to lay it out started in 1672 and in 1674 Louis 14th ordered 24 statues to grace the terrace. The commission was known as the Grande Commande.

These statues were executed by various master sculptors and comprised the Four Seasons, the Four Continents, the Four Elements, the Four Humors of Man, the Four Poems and the Four Hours of the Day. Several other statues representing figures from mythology were also commissioned.

The statues are spread out in other gardens as the first plans for the terrace were scrapped in 1685 in favor of the Parterre you can visit today. The two ponds are decorated with figures in bronze representing rivers and their important tributaries.

The Seine and the Marne were created by Le Hongre, the Garonne and the Dordogne by Coysevox, the Loire and the Loiret by Regnaudin and the Rhône and the Saône were by Tuby.

The water nymphs and groups of children were by Le Gros, Van Clève, Poultier and Lespingola.
Image Courtesy of Flickr and Daniel Jolivet.
4

The Bassin du Dragon is an impressive circular water feature that boasts a menacing dragon figure at its center, with four fish poised to escape its claws. You can find this great fountain, which was made in 1683, in the eastern part of the garden, near the Bosquet des Trois Fontaines and the Bosquet de l'Arc de Triomphe.
Image Courtesy of Wikimedia and Russell Yarwood.
5

One of the most popular of Versailles ponds is the Bassin de Neptune, which is the largest pond in the gardens. It lies at the extreme northern end of the north-south axe that includes the Orangerie, the Parterre d’Eau and the Fountain of the Dragon.

The original pond was constructed by André le Notre in 1681 and was called the “Pool below the Dragon”. It was modified in 1740 by Ange-Jacques Gabriel and the statues of Neptune and his wife Salacia, the minor water-god Proteus and the Titan water-god Oceanus where created by Lemoyne. The Bassin boasts 99 water features in all.

It is surrounded on three sides by gently sloping lawns, which in the summer are filled with spectators as a floating stage is set up on the pond for musical and firework displays to delight the crowds.

From June to the end of August, Versailles hosts the Grandes Eaux Musicales, or Fountain Shows. All the fountains are turned on each weekend and present a superb display set to baroque and classical music.

If you are lucky enough to be in Versailles during July and August, you can enjoy wonderful nocturnal displays of music, water and stunning lighting effects.
Image Courtesy of Flickr and khawkins33.
6

When Louis 13th used what is now the Chateau of Versailles as a hunting lodge, he had a pond created, which was called the Bassin des Cygnes. When Louis 14th began to expand the lodge, he had the pond transformed into the magnificent Bassin d’Apollon you can see today.

In 1668 the king commissioned the sculptor Tuby to create something that would represent a mythological figure in connection with the king himself. Tuby turned to the artist and decorator, Claude le Brun, for help.

As Apollo is the Sun-god and Louis 14th was known as the Sun King, it didn’t take le Brun long to come up with an idea. Tuby based his statue on le Brun’s drawings and worked from the Manufacture des Gobelins on his masterpiece, which took two years to finish. It was cast in lead with the gilding added in 1671.

The statue, which stands in the centre of the pond in front of the Grand Canal, is of Apollo emerging towards the east from the sea on his chariot, which is drawn by four horses. Surrounding the chariot are four Tritons, blowing on their horns to announce the new day, and four dolphins. At Apollo’s feet lies the figure of a cherub or perhaps a child, which represents Amour.
Image Courtesy of Wikimedia and Russell Yarwood.
7

If you are very rich or very powerful, you can obtain almost anything; Louis 14th, who was both, had no trouble indulging his every whim when it came to beautifying Versailles and one of his whims was the Grand Canal.

This artificial lake was laid out by André le Notre between 1668 and 1679. It is 1670 metres long and 62 metres wide, running in an east to west direction. It wasn’t only for the king’s pleasure, because it served a practical role too. As it lies on land lower than most of the garden’s fountains, water drains from them into the lake.

This extra water was pumped by windmills and horse powered pumps to a reservoir situated on the roof of the Grotte de Thétys and from there it fed the fountains of the gardens below the grotto.

Water was a very precious commodity at Versailles, seeing that it was situated 10 kilometres from and 150 metres above the River Seine. It was brought from the river to the Louveciennes Aqueduct by the “Machine de Marly” - a system of 14 huge water-wheels that operated 177 pumps. It was planned by Rennequin Sualem and built by Arnold de Ville.

The canal was used for nautical displays and boats were sailed on it. The Republic of Venice gave the king two gondolas and four gondoliers, who were housed in lodgings called “Petit Venice”. The king’s “boatyard” also consisted of several long-boats, a galley, a three-master, a brigantine and two yachts.
Image Courtesy of Flickr and Patrick.
8

Located near the Jardin du Roi, the Bassin de Saturne is another splendid fountain of the Versailles gardens. This striking gold water feature depicts Saturn surrounded by cherubs.
Image Courtesy of Wikimedia and अशोक सोयंके.
9

This water feature is easy to spot, as it sits in front of the Jardin du Roi, near the Bassin de Saturne. Spread across three levels, the Bassin du Miroir is bordered with two dragons carved by Hardy in 1702. The widest lower level is decorated with groups of children, while the upper level is dominated by sculptured Cupids, also by Hardy.
Image Courtesy of Wikimedia and Miguel Hermoso Cuesta.