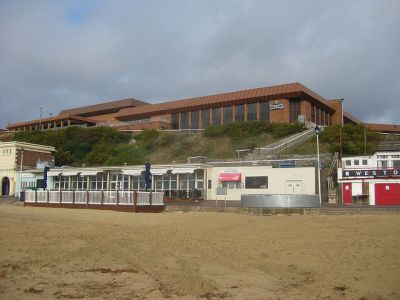 The Bournemouth International Centre (BIC) in Bournemouth, Dorset, is one of the primary venues for conferences, exhibitions, entertainment and events in southern England. Additionally, it is well-known for hosting national conferences of major British political parties and trade unions. The venue's Windsor Hall has a concert capacity of 6,500 and is one of the bigger indoor music venues in the UK, often included on the arena tours of major artists. The smaller Solent Hall can house exhibitions or hold up to 2,000 people for standing music concerts. The Solent Hall replaced the BIC's well-known swimming pool and wave machine in 2004. Owned and managed by Bournemouth Borough Council, the BIC is operated alongside its sister venue, The Pavilion Theatre and Ballroom.
Image Courtesy of Flickr and Matt From London.
Sight description based on Wikipedia.

Want to visit this sight? Check out these Self-Guided Walking Tours in Bournemouth. Alternatively, you can download the mobile app "GPSmyCity: Walks in 1K+ Cities" from iTunes App Store or Google Play. The app turns your mobile device to a personal tour guide and it works offline, so no data plan is needed when traveling abroad.