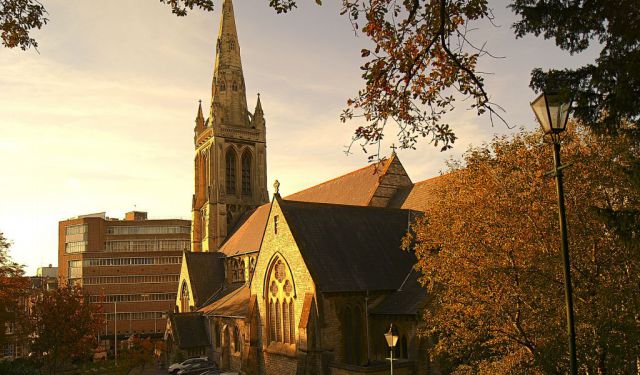 Typically for a seaside resort such as Bournemouth, sitting on the southern coast of England, the city's main attraction is the beaches. However, there are quite a few local sights unique to this place that will make your stay in Bournemouth just as enjoyable off-season, especially if you can explore them in more detail and learn about the history behind. This orientation walk will take you around some of the city's most picturesque Victorian and more modern landmarks so you can get a fuller picture of the delights that Bournemouth has to offer.
Image Courtesy of Flickr and JackPeasePhotography.
How it works: Download the app "GPSmyCity: Walks in 1K+ Cities" from iTunes App Store or Google Play to your mobile phone or tablet. The app turns your mobile device into a personal tour guide and its built-in GPS navigation functions guide you from one tour stop to next. The app works offline, so no data plan is needed when traveling abroad.

The Square is indeed a public square in the heart of Bournemouth separating the Central Gardens from the Lower Gardens. Underneath the square flows the river Bourne. Back in the 18th century this was a spot where the Decoy Pond House stood, operating a plank using which travelers crossed the river en route from Poole to Christchurch. In 1848 The Square made history as the birthplace of the composer Hubert Parry who was born practically next door to it, attesting to which fact is a blue memorial plaque. Another notable sight here is the clock tower, nicknamed the Leaning Tower of Bournemouth, a former tram shelter built in 1925 with a clock on the top, donated by Captain HB Norton, a magistrate and former Councillor. In 2000 the square was made almost fully pedestrian. It houses many shops, and has the Obscura café in the middle, renowned for and named after the built-in camera obscura which is no longer in use.
Image Courtesy of Flickr and Lets Go Out Bournemouth and Poole.
Sight description based on Wikipedia.
2

Commercial Road is a pedestrian street full of shops. Women will appreciate the numerous women's clothing shops. There are coffee shops, gift shops, jewelry stores, shoe stores, accessories and cosmetics. Men will also find a lot of shops with men clothing. There are only stylish brands on this road.
Image Courtesy of Flickr and xxxrmt.
3

The Bournemouth War Memorial is a distinctive landmark in the center of the town. It is dedicated to those brave people who died in the First World War. The memorial was built in 1921. It stands in the central gardens. This impressive monument is surrounded by sculptures of lions. Across the memorial you will see the big building of the Town Hall.
Image Courtesy of Wikimedia and LordHarris.
4

4) Church of the Sacred Heart

Church of the Sacred Heart is a Catholic Church situated in the centre of the city. It was constructed in 1875 and is an imposing building in Bournemouth. You will see the blend of several styles in the architecture of this church: neo-Gothic, neo-Norman and Victorian styles.
Image Courtesy of Flickr and Shawn Carpenter.
5

Richmond Hill is another shopping area in Bournemouth and is also the touristic part of the city, as there are some great touristic attractions, too. There are many really good gift shops and boutiques where everybody will find something special to take home.
Image Courtesy of Flickr and Debs (ò‿ó)♪.
6

St Stephen's Church is an Anglican church in Bournemouth, Dorset (formerly in Hampshire). The liturgical life of the Church is deeply rooted in a rich Anglo-Catholic tradition; the Church boasting a magnificent Lady Chapel, celebrating Marian masses, benediction and recitation of the Rosary for The Society of Mary. Devotion to Our Lady of Walsingham is also encouraged. Designed by architect John Loughborough Pearson, the church was built in stages between 1881 and 1898, as a memorial to Alexander Morden Bennett, first vicar of St Peter's Church, Bournemouth. A spire was never added to the tower. Legend has it that Pearson's aim when he designed St. Stephen's church was to create a building "which brought people to their knees." With the great artistry and painstaking attention to detail that went into St. Stephen's construction, people believe Pearson was able to achieve just that.
Image Courtesy of Wikimedia and LordHarris.
Sight description based on Wikipedia.
7

St Peter's Church is a Church of England parish church in Bournemouth in the English county of Dorset. The building was completed in 1879 to a design by G.E. Street as the founding mother church of Bournemouth. It has unusual paintings, notable stained glass and alabaster, and a renowned musical tradition. The chancel has been described as 'one of the richest Gothic Revival interiors in England'.

St. Peter's was built over a period of twenty-four years from 1855 at the instigation of the vicar, the Reverend Alexander Morden Bennett, to replace an earlier building. G.E. Street was commissioned to create a finer church to match the beauty of the town. It was constructed between 1854 and 1879 on the foundations of the 1840s predecessor. The church, which sits opposite Beales department store in the heart of the town centre, was the founding mother church of Bournemouth. The 202 ft high spire is a landmark across the town centre and beyond. The church has an organ of three manuals and 48 speaking stops by Harrison and Harrison in 1914, rebuilt by Rushworth and Dreaper in 1976. There is also a Steinway grand piano in the church, and a Kawai grand piano in the song room.

Image Courtesy of Wikimedia and Jim (JL2003).
Sight description based on Wikipedia.
8

Westover Road is one of the main shopping streets in the center of Bournemouth. There are a lot of jewelers, clothes and accessories shops and boutiques along this street. Westover Road is partly pedestrianized. Westover Road is for those who want to shop in upmarket shops.
Image Courtesy of Wikimedia and Jen.
9

Image Courtesy of LordHarris.
Sight description based on Wikipedia.
10

The Pavilion Theatre and Ballroom is Bournemouth's traditional venue for year round entertainment. Built in the 1920s, it retains its splendour and elegant styling and is Bournemouth's regular home for West End stage shows, Opera, Ballet, Pantomime and Comedy as well as for corporate presentations and dinner dances, product launches and small conferences. Initially the Pavilion's main auditorium was not called a theater, but a Concert Hall, and within a few years it became apparent that its shortcomings in presenting staged productions were insuperable. As a result, in 1933 the stage was enlarged, both in depth and height, and it was reopened as a theater in July 1934. Numerous further alterations have been undertaken since, including the addition of two stores to either side of the main entrance in the early 1950's, and the replacement of the large fountain in the forecourt by a smaller one in 1968. In 1998 the building was listed Grade II and its future has therefore been protected.
Image Courtesy of Flickr and focalpunkt.
Sight description based on Wikipedia.
11

Bourmouth Park is a family-friendly park along Westover Road. The park boasts beautiful scenery and a pond. There are always many people walking through the park or lying on the grass. In this park, there is a balloon that can take you up into the air and treat you to a panoramic view of the town, sea and beaches.
Image Courtesy of Flickr and shining.darkness.
12

Situated on Bournemouth’s seafront, the Oceanarium offers visitors a journey around the waters of the world. 10 recreated environments include the Amazon, Key West, the Mediterranean, Abyss, and the Great Barrier Reef. The Oceanarium is home to the world’s first Interactive Dive Cage, which submerges users in a 270-degree virtual view of the ocean.

Interactive touch technology brings visitors up close to computer generated sea creatures including a dolphin, manta ray and shark through a series of animated experiences, games and challenges. It also features an amazing encounter with a blue whale that swallows the Cage, taking visitors on a journey through its digestive system. Launched in June 2008, the Oceanarium’s interactive feature, Global Meltdown, looks into the potential effects of global warming. Visitors are transported to an imagined time in the future when sea levels have risen to such an extent that tropical fish and sharks swim through the streets of London. The Oceanarium is home to hundreds of creatures from across the globe. The Oceanarium welcomes in excess of 225,000 visitors per year and in November 2008, the Oceanarium was announced as Tourism Attraction Experience of the Year at Bournemouth’s annual Tourism Awards. The attraction is owned by Spanish leisure giant Parques Reunidos, who operate 67 parks across the world.
Image Courtesy of Flickr and shining.darkness.
Sight description based on Wikipedia.
13

Surrounded by seven miles of golden sand, Bournemouth Pier is a popular destination with thousands of visitors coming each year. In addition to the beautiful beach and town panorama visible from the Pier, it offers a spectacular sea view across the bay, framed by the Isle of Wight on the one side and the Purbeck hills on the other. Bournemouth Pier boasts a unique and charismatic façade, as well as a wide range of attractions, among them the Pier Theater (in place for over 50 years) and a restaurant at the Pier's end. There's also a good selection of retail outlets, selling souvenirs to make one's stay in the city truly memorable.
Image Courtesy of Wikimedia and Christophe.Finot.