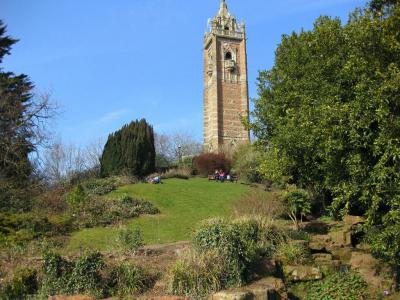 Brandon Hill Park is considered the oldest park in Bristol. Beginning in ancient times, locals have been using this area for various leisure activities. It is a great place to begin exploring Bristol, as it offers a wonderful panorama of the city. Brandon Hill, also known as St Brandon's Hill, is a hill close to Bristol city centre, between the districts of Clifton and Hotwells, in south west England. At the summit is the Cabot Tower, opened in 1897 to commemorate the 400th anniversary of the voyage by John Cabot from Bristol to Newfoundland in 1497. Brandon Hill was granted to the council in 1174 by the Earl of Gloucester, and used for grazing until 1625 when it became a public open space, possibly the oldest municipal open space in the country. During the late 18th and early 19th century it was a popular venue for public meetings by reform groups like the Chartists. In 1832, the hill was the location of the Great Reform Dinner, which was famously gatecrashed. From 1840 onward Brandon Hill was improved with walls and walks. A crowd of 30,000 watched the launch of SS Great Britain from the hill on 7 July 1843. The park is steep and is divided into informal gardens, a small nature reserve and open grassland. The two hectare nature reserve has been run since 1980 by the Avon Wildlife Trust who have their headquarters beside the park. The wildflower meadow includes ox-eye daisies, yellow rattle and knapweed. A pond provides a breeding site for frogs, toads and Smooth Newts. The butterfly garden supplies food for caterpillars and many kinds of butterflies. Birds such as jay, bullfinch and blackcap are seen in the reserve. Native trees and shrubs have been planted, and the meadow is cut for hay in July.
Image by paleololigo on Flickr under Creative Commons License.
Sight description based on wikipedia