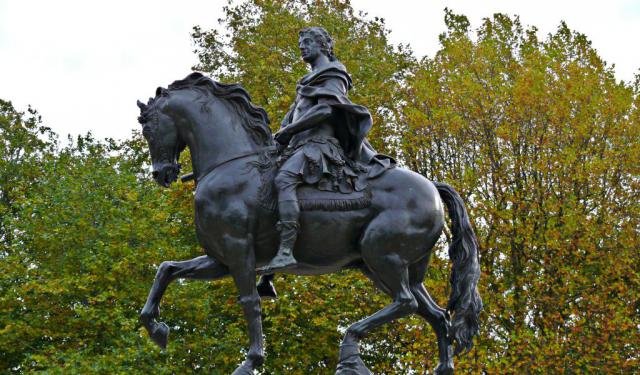 Bristol is an old city with a rich historical heritage represented in its buildings, sculpture and of course, its statues. Take this walking tour to see Bristol's most significant statues.
Image Courtesy of Wikimedia and Rob Brewer.
How it works: Download the app "GPSmyCity: Walks in 1K+ Cities" from iTunes App Store or Google Play to your mobile phone or tablet. The app turns your mobile device into a personal tour guide and its built-in GPS navigation functions guide you from one tour stop to next. The app works offline, so no data plan is needed when traveling abroad.

Statue of William III is a historic statue in the center of Queen Square in Bristol, England. The statue of William III by John Michael Rysbrack, cast in 1733 and erected in 1736 to signify the city's loyalty. The bronze statue is on a Portland ashlar pedestal with a molded plinth and cornice. It has been designated by English Heritage as a grade I listed building.
Image Courtesy of Wikimedia and Steinsky.
Sight description based on Wikipedia.
2

The statue of John Cabot is located next to Arnolfini Gallery. He is represented gazing over the harbor in Bristol. John Cabot was an Italian navigator and explorer who crossed the Atlantic to North America in the late 15th century.
Image Courtesy of Wikimedia and Linda Bailey.
3

The Thomas Chatterton statue was erected in memory of the young British poet. He went to London searching for fame, but found only indifference toward him. He committed suicide at the age of seventeen.
Image Courtesy of Wikimedia and Immanuel Giel.
4

The life-size statue of William Tyndale, martyr and Bible translator, seated on a bench, is located in Millennium Square. The statue shows him working on the translation of the New Testament. In 2008, vandals attacked the statue, which was taken away, repaired, and reinstalled. William Tyndale (1494–1536) was an English scholar who became a leading figure in Protestant reform in the years leading up to his execution. He is well known for his translation of the Bible into English.
Image Courtesy of Wikimedia and Immanuel Giel.
Sight description based on Wikipedia.
5

The Cary Grant statue was set in Millennium Square in 2001 to commemorate the actor. It is a masterpiece of sculptor Graham Ibbeson, who figured Cary Grant in his characteristic urban style.
Image Courtesy of Wikimedia and Immanuel Giel.
6

Poseidon (or Neptune), the god of the sea, is a perfect character for Bristol, being a city port. Initially the statue was placed in the Temple area, near Bristol Bridge, but it traveled a lot. It is now located in the pedestrianized area of the city center.
Image Courtesy of Wikimedia and Drow male.
8

The statue of John Wesley, seated on horseback, was created in 1933. It is located in the court of the Wesleyan chapel in Broadmead. John Wesley was a great Methodist preacher of the 18th century.
Image Courtesy of Flickr and Tim Green.