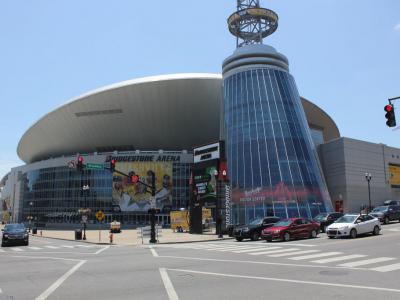 Although it features ice hockey and basketball sporting events, the massive Bridgestone Arena (originally Nashville Arena, and formerly Gaylord Entertainment Center and Sommet Center) was primarily designed for concerts. Extra care has been invested into acoustical systems, and the sound is of exceptional quality, with something of an electric vibe to it.

Conveniently located in the downtown core and containing more than a million sq-ft of total space, the venue seats as many as 20,000 for center-stage concerts and 18,500 using its proscenium stage. Since opening in 1996, it has hosted the likes of Faith Hill, the Rolling Stones, the Dixie Chicks, Jimmy Buffett, Eric Clapton, and Mary J. Blige – though it was Mumford & Sons who set the record on March 22, 2019, with 19,047 fans in attendance. Other than the seats being close together, it's an overall great experience, not the least because you can generally get through security very quickly.
Image by Nicolas Henderson on Flickr under Creative Commons License.