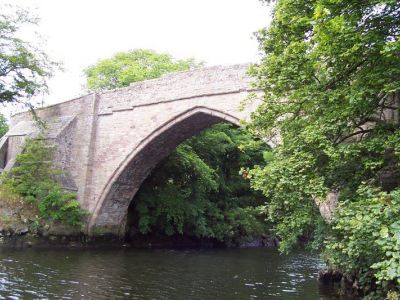 The Brig o' Balgownie (originally Bridge of Don) is a thirteenth century bridge spanning the River Don in Old Aberdeen. Construction of the bridge was begun in the late 13th century by Richard Cementarius, although its completion was not until 1320 at the time of the Scottish War of Independence. After falling into disrepair in the mid-sixteenth century it was extensively renovated in 1605. The bridge is constructed of granite and sandstone. Its single Gothic arch has a span of over 12 meters and at low tide the apex of the arch lies over 17 meters above the water-line. Today it is open to foot and bicycle traffic only. The bridge ceased to be a major route in 1830 when the new Bridge of Don was built five hundred yards downstream.
Image by Belhelvie on Wikimedia under Creative Commons License.
Sight description based on wikipedia