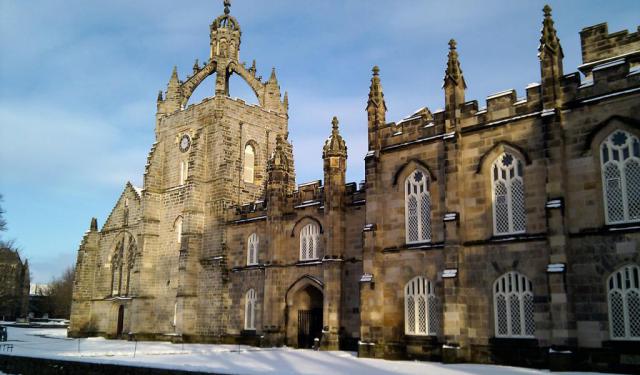 Established in 1489 as a separate burgh, Old Aberdeen was an important political, ecclesiastical and cultural center since the late Middle Ages. The locality merged with the rest of Aberdeen only in 1891. Today, the central part of the Old Town is a conservation area, characterized by well-preserved medieval dwellings and many other unique, vernacular structures of the 17th-early 19th centuries, built in the locally ubiquitous grey granite.

A historic landmark in its own right, King's College is a true architectural monument, dominating Old Aberdeen and comprising, among other highlights, the iconic late 15th-century King's College Chapel. Arguably, this is the most recognizable building on the university campus and one of the two surviving Scottish medieval churches with open "crown" spires. Just south of King's College lie the Powis Gates, an impressive and imposing archway with a Near Eastern influence demonstrated in its 'minaret' towers.

Among other major draws in the area are the recently restored (early 18th-century) Old Town House – an ideal example of Scottish architecture, currently home to King's Museum; the Cruickshank Botanic Gardens – a gift to the University of Aberdeen from 1898; and the Wallace Tower – an early 17th-century building originally constructed in the center of Aberdeen, but then moved, stone by stone, to Seaton Park in the 1960s.

To explore these and other notable locations and discover the beauty of Aberdeen's Old Town, take this self-guided walking tour.
Image Courtesy of Wikimedia and Nick Bramhall.
How it works: Download the app "GPSmyCity: Walks in 1K+ Cities" from iTunes App Store or Google Play to your mobile phone or tablet. The app turns your mobile device into a personal tour guide and its built-in GPS navigation functions guide you from one tour stop to next. The app works offline, so no data plan is needed when traveling abroad.

Powis Gates are a set of gate piers in Old Aberdeen. The cylindrical towers were designed by Alexander Fraser with an inspiration from Turkish minarets. The tops of the gates are slate caps with golden orbs and finials. The towers were completed in 1834.

Now a historical landmark, the gates were once the entrance to Powis House. The home was owned by Hugh Fraser Leslie of Powis who owned coffee plantations in Jamaica. The Fraser Leslie Arms can still be seen on the arch.

A shield with a bust of three men rests on the towers. It was placed in honor of the Slavery Abolition Act of 1833.

Powis Gates are now located on the King's College campus of the University of Aberdeen. The archway of the gates leads to the Crombie-Johnston and King's postgraduate residence halls.

Visitors can view the Powis Gates at any time. There is no cost to tour the gates.

King's College Chapel is the main chapel of the University of Aberdeen. It is arguably the most recognizable building on the university campus due to the presence of its Crown Tower. The chapel was built between 1498 and 1509.

The interior of the chapel continues to display the choir stalls and rood screen from the chapel's earliest days. The design was inspired by Solomon's Temple. The chapel sanctuary contains five decorations that are made from canvas and wooden scaffolding. These beautiful and meaningful displays that are unique to the chapel.

The antechapel holds the university's war memorial. It contains the names of more than 500 university students who were killed during World Wars I and II.

The chapel is open to visitors every Monday through Friday from 10 AM to 3:30 PM. Visitors may attend services every Wednesday while university classes are in session. As with the rest of the King's College, the chapel honors King James IV of Scotland.
Image Courtesy of Wikimedia and Devinberg.
3

In its heyday, the Old Town House functioned as the center of the trading community. However, the city quickly outgrew the small house and a much larger building was commissioned. The Old Town House is now home to the King's Museum.

The museum displays rotating exhibitions from the University of Aberdeen. Students and academic staff work together to find exhibits from the university's past to share with the public. They also offer services for schools and evening lectures.

King's Museum in the Old Town House is open to visitors from 11:30 AM to 4:30 PM on Tuesday through Saturday.
Image Courtesy of Wikimedia and Nick Bramhall.
4

The Cruickshank Botanic Gardens were built by Anne Cruickshank in 1898. The land was dedicated to Cruickshank's brother Dr. Alexander Cruickshank. It was then given in part to the University of Aberdeen.

The botanic gardens are located on 11 acres on the King's College campus of the University of Aberdeen. The low-lying land is about one mile from the North Sea. The gardens consist shrubs, a rock and water garden, a sunken garden, a rose garden and an arboretum.

The Cruickshank Botanic Gardens are open year-round. There is no charge for entry to the garden. All tours are self-guided except for those scheduled in advance for groups of 10 or more. The botanic gardens are open from April through September from 9 AM to 7 PM and from October through March from 9 AM to 4:30 PM.
Image Courtesy of Wikimedia and Colin Smith.
5

St Machar's Cathedral, sometimes called Old Machar, is a Church of Scotland church. The church is named in honor of St. Machar who was said to have accompanied St. Columba on his travel to Iona. The legend states that, on this journey, God told Machar to establish a church at the River Don. St. Machar is said to have founded the church in the year 580.

A cathedral was built on this site in 1131. It was replaced in 1290 with the current Early English style building. Work continued on the cathedral for more than 150 years before it was fully functional. During that time, a quarter of Sir William Wallace's remains were interred in the walls of the cathedral. The church was finally completed in 1530.

Visitors to the church will find a stone interior with massive gothic archways. There are multiple stained glass windows throughout the church with dates that range from 1870s to 1970s. The Sanctuary Cross in the south aisle is a conglomerate from a 21st century shaft and a 12th century head. The Barbour Tryptich, made from wood, was created by Roland Fraser in 1997.

The three effigies are some of the most striking features of the church. These effigies represent three clerics that date to the 1400s. They were previously held outside of the church but were moved to the interior during one of the many restoration projects.

A number of notable Scottish individuals have been interred on the church grounds and inside the building itself. Along with William Wallace, some of these burials include John Joy Bell, James Edward Crombie, George Dickie and David Gill.

Why You Should Visit
See the beautiful stained glass cathedral, enjoy the English and gothic architecture, and pay respects to some of Scotland's most notable individuals

Tips
The church is open to visitors from 10 AM to 4 PM Monday through Saturday. Sunday visitors are welcome from 2 PM to 5 PM.
Image Courtesy of Wikimedia and Mike Christie.
6

Wallace Tower, sometimes referred to as Benholm's Lodgings, is an early 17th-century building located at the southern edge of Seaton Park. It was originally constructed in the center of Aberdeen. It was moved one stone at a time and rebuilt in Seaton Park in the 1960s.

The tower was built by Sir Robert Keith of Benholm. It was later bought by the Duns of Tarty, and then Abernethy. It eventually became a pub until, in a controversial move, retailer Marks & Spencer sought to relocate the tower so that their retail store could be expanded.

The move was a difficult one for Marks & Spencer. The interior of the building had rotted wood that could not be moved and was therefore burned. Likewise, the city worried that anyone who leased the building would attempt to purchase it under right-to-buy laws. Therefore, though the tower was moved, it has remained unused and boarded up.

Those who wish to see the Wallace Tower can do so by going to Seaton Park. The park is open 24 hours.
Image Courtesy of Wikimedia and Stanley Howe.
7

Seaton Park is a public park that straddles the River Don. Open to the public, Seaton Park is one of the largest parks in the city. It has been in regular use since 1947.

The park is perhaps best known as the home of Wallace Tower. The tower was relocated to Seaton Park during the 1960s. Another interesting feature of the park is a mound that dates to the Bronze Age.

Seaton Park is open 24 hours. However, the paths are not lit very well at night. The city encourages people to walk on trails during daylight hours in order to avoid accidental injury.
Image Courtesy of Wikimedia and Mussklprozz.
8

The Brig o' Balgownie is a 13th century bridge over the River Don. Made from granite and sandstone at the likely behest of Robert the Bruce, Scottish King from 1306 to 1329. Some say it was commissioned by Bishop Henry Cheyne. Neither the exact year nor the designing engineer of the bridge are known.

The Gothic diamond arch style of the bridge has caused some to believe it was designed by Richard Cementarius. This is probably due to a design that is similar to that of Drum Castle, which is also said to be a Cementarius work. The bridge 39 feet long with an arch that is 56 feet above the water line.

The bridge was originally called the Bridge of Don. It is unknown exactly where the name Balgownie originated. There is consensus that it is based on the local barony, which was probably called Palgoueny or Polgowny.

Visitors should plan to cross the bridge as part of their Aberdeen visit, but they should also look for a distant spot from which they can admire the Brig o' Balgownie and the picturesque River Don.
Image Courtesy of Wikimedia and Belhelvie.