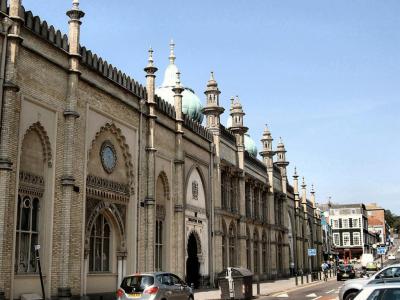 As soon as the Pavilion passed to the town, different uses were proposed for the Dome. The proposals were a swimming pool, law courts, and an assembly room. In 1866 workers began to execute the Moorish designs of Philip Lockwood.

Lockwood installed many paintings, stained glass and an enormous chandelier. The chandelier had more than 520 gas jets. There were also smaller chandeliers hanging around the room.

The woefully expensive chandeliers came down by 1934. The Dome was then completely done over with art deco designs by Robert Atkinson. The Concert hall was furnished with walnut paneling and a new entrance.

The Corn Exchange was initially the riding school for the Prince Regent. The space measured 174 feet long, 58 feet wide and 34 feet high. The roof was made with arched timbers for support. A new facade featured a statue of Ceres, goddess of corn, by James Woodford.

Mrs Maria Fitzherbert, a longtime lover and friend of George, once stabled her horses in the space now filled by the Studio Theatre. The stables became Dome Cottage, which in time became the Pavilion Theatre. In 2012 it was named the Studio Theatre.

Redevelopment is underway on the Corn Exchange and Studio Theatre. The aim is to restore heritage elements, cafes, bars and public areas the better to enjoy the exotic Regency architecture.
Image Courtesy of Wikimedia and Paul Gillett.

The town of Bristelmestune is first mentioned in William the Conqueror's Domesday Book of 1085. In 1810 it officially became Brighton. The area of Brighton has known settlements since the Bronze Age. It experienced Celts, Saxons, Romans. But the train stopped with the arrival of the Normans in 1066.

When Conquering William took the helm, Bristelmestune was a fishing village of 400 souls....  view more

No trip to Brighton is complete without a stroll along the seaside. Here you will know right away that you’re in an English seaside resort, catching the scent of fish and chips and watching deckchairs fluttering in the breeze. Stretching along the pebbly coastline for nearly 5 miles, Brighton's promenade has that Victorian glamour with a dash of youthful energy and style, buzzing with life...  view more