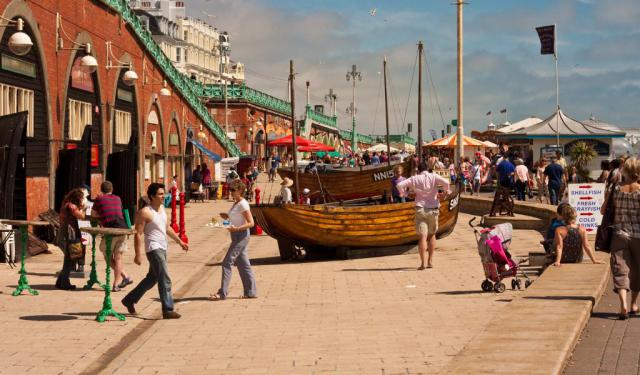 Image by Garry Knight on Flickr under Creative Commons License.

By the water you’ll know you’re in an English seaside resort, catching the scent of fish and chips and watching deckchairs fluttering in the breeze. The pebble beach, 5.4 miles long, has that Victorian glamour with a dash of Brighton’s youthful energy and style, with bars and clubs keeping the waterfront alive after dark. ***PH***
How it works: Download the app "GPSmyCity: Walks in 1K+ Cities" from iTunes App Store or Google Play to your mobile phone or tablet. The app turns your mobile device into a personal tour guide and its built-in GPS navigation functions guide you from one tour stop to next. The app works offline, so no data plan is needed when traveling abroad.

Brighton’s Sea Life Centre is located near the Brighton Pier and is an excellent place for family entertainment! With its vast collection of displays, it will tell you a lot of interesting and useful information about the marine world. Learn more about aquatic life and enjoy Brighton’s Sea Life Centre!
Image by Hassocks5489 on Wikimedia under Creative Commons License.
2

Volk's Electric Railway (VER) is a narrow gauge heritage railway that runs along a length of the seafront of the English seaside resort of Brighton. It was built by Magnus Volk, the first section being completed in August 1883, and is the oldest operational electric railway in the world, though it was not the first electric railway to be built. It was preceded by electrification of Miller's line in 1875, Werner von Siemens' 1879 demonstration line in Berlin and by the Gross-Lichterfelde Tramway of 1881, although none of these now remains in operation.

Operated as an historical seafront tourist attraction, the railway does not usually run during the winter months, and its service is also liable to occasional suspension due to severe weather or maintenance issues.

Image by Briantist on Wikimedia under Creative Commons License.
Sight description based on wikipedia
3

One of the UK’s most famous beaches, Brighton Beach is a pebbly beach with certified Blue Flag waters a 4-mile promenade that buzzes with life in all seasons. It is known as London’s beach, even though it is 47 miles away. Unsurprisingly, it can get very crowded on Bank Holidays, but that’s all part of the appeal.

The waters can be chilly but are popular for swimming and watersports such as windsurfing, sailing, kayaking, stand-up paddle boarding and wakeboarding. They all look good from the comforts of a deckchair! Kids can have fun in the free paddling pool. Sand is imported each summer to accommodate the volleyball court.

There’s a Victorian pier nearby and a traditional fairground along with cafes, restaurants, fish and chips and beach clubs. Next to the pier is the Sea Life Centre which is probably the oldest aquarium in the world, dating back to 1872.

A stroll along the prom will be enhanced with an ice cream or an entertaining performance by street performers around the Fishing Quarter of the beachfront. Brighton Beach is within walking distance of the town and shops. There are car parks nearby (fees apply) and a regular bus service.

The eastern end of Brighton Beach is an official naturist beach. When it opened in 1980, it was the first in the UK.

In December, the beachfront hosts the Winter Solstice celebrations followed by the annual New Year Swim. There’s lots of homemade paper lanterns and lantern making workshops if you want to make your own rather than buying one for a local shop.


Image by Jeremy Keith on Flickr under Creative Commons License.
4

The West Pier was its rival but was closed in 1975 and was subsequently severely damaged by fires and storms, with the remaining iron structure being partially demolished in 2010. Work began on the Palace Pier in 1891 and it opened in May 1899 after costing a record £27,000 to build. This was Brighton's third pier. A concert hall opened two years later, and by 1911 this had become a theater. The pier features prominently in the 1971 film, Carry On at Your Convenience, and it is frequently shown iconically to "set" film and television features in Brighton, for example in scenes in Mirrormask, The Persuaders, the Doctor Who serial The Leisure Hive (1980), the 1979 film Quadrophenia.
Image by Arild Vågen on Wikimedia under Creative Commons License.
Sight description based on wikipedia
6

Next to the Old Penny Arcade Museum on Brighton seafront, you will find old carousel. With its numerous, beautiful animal figures and splendid décor, it attracts a lot of tourists and locals. If you are walking with kids, you certainly shouldn’t miss this place!
Image by Les Chatfield on Flickr under Creative Commons License.
7

The Brighton Fishing Museum is located in the Fishing Quarter, the heart of Brighton seafront. It will teach you about the rich history of the fishing community in Brighton through film, photography, paintings and memorabilia of Brighton seafront life. The museum is open every day and admission is free.

The Grand Brighton Hotel is a historic Victorian sea front hotel in Brighton on the south coast of England. Designed by John Whichcord Jr. and built in 1864, it was intended for members of the upper classes visiting the city, and remains one of Brighton's most expensive hotels. The Grand Hotel was designed by architect John Whichcord Jr., and built in 1864 on the site occupied previously by the West Battery at Artillery Place.

The Brighton Hotel Bombing happened on 12 October 1984 at the Grand Hotel in Brighton. The bomb was planted by Provisional Irish Republican Army (IRA) member Patrick Magee, with the intention of assassinating Prime Minister Margaret Thatcher and her cabinet who were staying at the hotel for the Conservative Party conference. Patrick Magee had stayed in the hotel under the false name of Roy Walsh during the weekend of 14–17 September 1984. During his stay, he planted the bomb under the bath in his room, number 629. The bomb detonated at 2:54 a.m. on 12 October.

Margaret Thatcher was still awake at the time, working on her conference speech for the next day in her suite. It badly damaged her bathroom, but left her sitting room and bedroom unscathed. Both she and her husband Denis escaped injury. She changed her clothes and was then escorted to Brighton police station. As she left the police station, she gave an impromptu interview to the BBC's John Cole at around 4:00 a.m., where she said the conference would go on as usual. Thatcher went from the conference to visit the injured at the Royal Sussex County Hospital. The bomb failed to kill Thatcher or any of her government ministers.

Amongst many appearances in television and film, the Grand Hotel was visited by the Trotter family in 1992, in an episode of the BBC Television comedy Only Fools and Horses entitled "Mother Nature's Son". The hotel has also been featured in ITV's Coronation Street.
The hotel also featured in the film Quadrophenia where Sting's character "the Ace Face" was the bellboy.
Image by Hassocks5489 on Wikimedia under Creative Commons License.
Sight description based on wikipedia
9

The site was originally Belle Vue Field—used at various times as a military camp (mentioned in Pride and Prejudice), a showground and the location of a windmill. The square was a prestigious, high-class development, attracting the social elite. The square gradually lost its prestige status after the First World War as hotels started to move in. The square's central garden, originally private, has been council-owned since 1884 and is publicly accessible, and an underground car park was built beneath it in 1969.
Image by Martin Robson on Flickr under Creative Commons License.
Sight description based on wikipedia
10

British Airways i360 is a 162 m (531 ft) observation tower on the seafront of Brighton, at the landward end of the remains of the West Pier. The tower opened on 4 August 2016. From the fully enclosed viewing pod, visitors experience 360-degree views across Brighton, the South Downs and the English Channel.

British Airways i360 was designed, engineered, manufactured and promoted by the team responsible for the London Eye. The attraction cost £46 million, with £36 million being funded by a Public Works Loan Board (PWLB) loan through Brighton and Hove city council.

Formerly known as the "Brighton i360", the project aimed to attract 739,000 paying customers every year. The owner of the site, the West Pier Trust, hoped in 2014 that a successful i360 would lead to the rebuilding of the historic West Pier.
Image by Arild Vågen on Wikimedia under Creative Commons License.
Sight description based on wikipedia