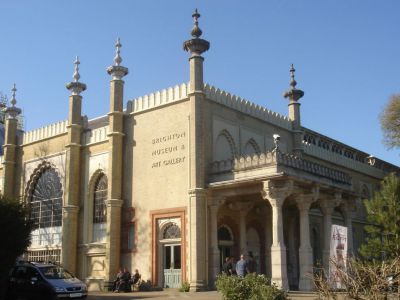 Brighton Museum & Art Gallery is a free-to-view municipally-owned public museum and art gallery in the city of Brighton and Hove in the South East of England. It is part of "Royal Pavilion & Museums, Brighton and Hove".

The building which houses the collection is part of the Royal Pavilion Estate and was originally built for the Prince of Wales, later George IV and completed in 1805. In September 1851 it was announced that part of the Pavilion was to be appropriated for annual art exhibitions and two months later the first of these was held. The local talent to which it was confined included Frederick Nash and Copley Fielding. The room devoted to the exhibition was the original South Gallery, now the First Conference Room, but later the exhibitions even spread to the Great Kitchen. The museum and art gallery occupied its current situation in the building in 1902.

Operation hours: Tuesday – Sunday: 10 am – 5 pm;
Image by The Voice of Hassocks on Wikimedia under Creative Commons License.
Sight description based on wikipedia