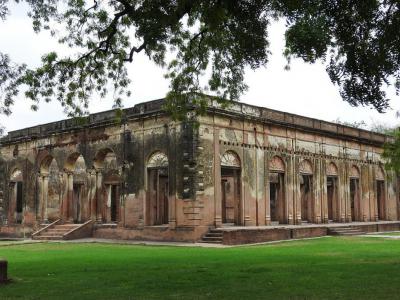 The Residency is a complex of buildings that were raised in 1800 by Nawab of Oudh, Saadat Ali Khan. It was the residing place for the British General who was a representative in the court of Nawab. In 1857 the place suffered significant damage during a prolonged battle, known as the Siege of Lucknow. The Residency has been kept as it was at the end of the battle, and the walls are still scarred by cannon shots. Even after India attained Independence, little has changed. Around the ruined building there are lawns and flowerbeds. There is a graveyard at the nearby ruined church where 2000 men, women and children are buried, including Sir Henry Lawrence who lost his life defending the empire. There is an inscription near his tomb that reads "Here lays the son of Empire who tried to do his duty."