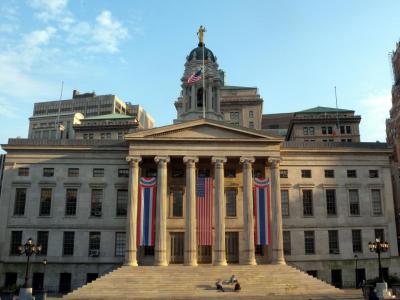 Formerly the City Hall of the once independent Brooklyn (at one point, the fourth largest city in America), this Tuckahoe marble edifice was designed by architects Calvin Pollard and Gamaliel King in the Greek Revival style, and was completed in 1848.

On February 26, 1895, the structure suffered severe damage after waste paper caught fire and destroyed the cupola, complete with the statue of Justice on top of it, as well as the top floors. To add insult to injury, the water used to put out the fire ruined the walls and ceiling of the Common Council chamber.

Three years later, a new Victorian cast-iron cupola was built, designed by Vincent C. Griffith, upon which was placed a flag. It was around that time, in January 1898, after Brooklyn merged with the City of New York, and Kings County subsequently transformed into the Borough of Brooklyn, that the building was renamed Brooklyn Borough Hall.

Starting in the 1930s, there were numerous proposals to raze the Hall, based on arguments that it no longer performed any governmental function, that its architecture was not particularly notable, and that it was a monument to an extremely brief era in Brooklyn's history. In 1966, however, the building was designated a city landmark by the then-new New York City Landmarks Preservation Commission, and then added to the National Register of Historic Places, in 1980.

The latter fact prompted its massive renovation in the 1980s, during which the original copper shingling on the cupola was restored and the flag was replaced with a new figure of Lady Justice. In the mid 2010s, after restoration of the adjacent plaza, the latter became a popular skate spot, renowned for its smooth surface.
Image Courtesy of Wikimedia and Jim.henderson.
Sight description based on Wikipedia.