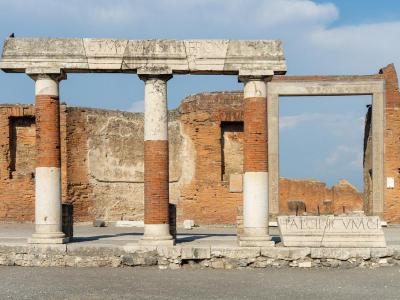 The Building of Eumachia is found on the eastern side of the Forum. An elegant, well preserved house, it can be identified by an ornate carved marble frieze around the entrance. Two inscriptions found within the building show that it was owned by Eumachia, a local priestess of Venus. Eumachia was also a successful business owner, having inherited a wool production company from her husband. It is believed that this building may have housed a factory, producing wool and cloth for the entire city. Others argue that due to Eumachia’s status as a priestess, it may have been used as a place of worship.

The building dates back to the Tiberian age of Rome. It has a façade with two apses, and four rectangular niches which once housed statues. Two further statues were housed in a colonnade at the centre of the house. In the style of many grand Roman residences, it surrounded an open air peristyle, or courtyard. The statues depict the Concordia Augusta, the wife of Augustus Caesar, and Eumachia herself. These figures, combined with the known history of Eumachia and the building she commissioned, show the influence and respect afforded to many successful women in the Roman era.
Image by steeljam on Flickr under Creative Commons License.