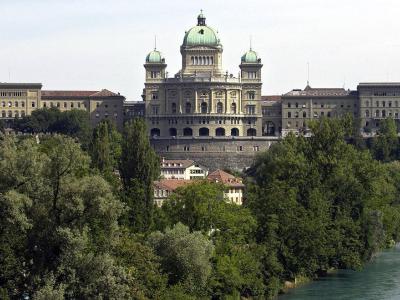 In the heart of Federal Place stands the Bundeshaus, or the Federal Building. Home of the Swiss Parliament since 1902, this beautiful building is home to the government of Switzerland. The porch on the south facing side has the most stunning views of the Alps on beautiful sunny days while the front of the building has beautiful sculptures depicting the origins of the Swiss Confederation. The Latin phrase "Confoederatio Helvetica" is also inscribed on the front of the building indicating the Confederation of Helvetian states and is also the origin of the CH as seen on license plates and internet sites.

The two chambers where the National Council and the Council of States meet are separated by the Hall of the Dome. The dome itself has an external height of 64 m, and an internal height of 33 m. The mosaic in the center represents the federal coat of arms along with the Latin motto "Unus pro omnibus, omnes pro uno" (One for all, and all for one), surrounded by the coat of arms of the 22 cantons that existed in 1902. The coat of arms of the Canton of Jura, created in 1979, was placed outside of the mosaic.

Why You Should Visit:
During the week, you can book a guided tour inside the building to learn more about the Swiss Federation's history and how it all started. The view over Bern from the terrace is alone worth the visit!

Tip:
The front side of the building is where you'll find a flea market and cafés, while the back side has a magnificent view perfect for sunset.
Tours run twice a day, with reservation required at least one day before. Languages are German, French, Italian, Rhaeto-Roman, English.
Image Courtesy of Wikimedia and Peter Mosimann.
Sight description based on Wikipedia.