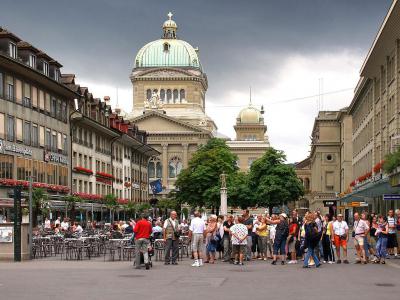 Bundesplatz, also known as Federal Square, is an old plaza in the center of Bern. Bundesplatz is part of the medieval city center, which is a UNESCO Cultural World Heritage Site.

As a landmark, Bundesplatz is important to see because it is an excellent starting point for any walking tour of Switzerland's capital city. From Bundesplatz, visitors can easily view Bundeshaus, the Swiss Parliament Building that is otherwise known as the Federal Palace. It is also a short walk to such sites as Kafigturm, Hollanderturm and Kleine Schanze park.

Bundesplatz is meaningful in its own right as well. As the central location of the Old City, visitors can walk on the land that was first settled in the 12th century. Duke Berchtold V of Zahringen chose the area because it was encased on three sides by the Aare, a tributary of the Rhine. The first expansion of the city began in 1191 with several more taking place over the next 300 years.

As traffic grew in Bern, so did the need for parking. Bundesplatz was used as a parking lot from 1945 through 2003. At that time, the site was redesigned with natural stone slabs and 26 fountains that represent the 26 cantons. At dusk, a light band is illuminated that guides a curved path to the parliament building.

Visitors should consider spending an evening at Bundesplatz where they can enjoy the light show at different points throughout the year. Dancing lights are projected onto the Federal Palace three times in the evenings with a fourth performance on weekends.

Why You Should Visit:
More than just a nice place to walk around, there is usually some form of activity going on such as a festival with crafts and food being sold and, weather permitting, you can sit outside and watch the bustle.

Tips
Those who aren't in the city during the light show can still enjoy the illuminated beauty of the Federal Building and the 26 fountains.
Image Courtesy of Wikimedia and Pierre Bona.