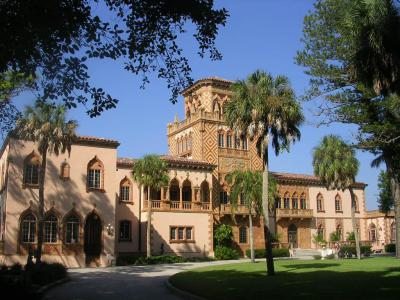 When you visit the Ringling Museum, you can pay extra to see the Ca d'Zan Mansion. It is worth every penny.

The Ca d'Zan Mansion was the winter home for John Ringling and his wife, Mable. After years of visiting Italy, the couple decided to build a home replicating the Venetian Gothic style. They hired an architect from New York, Dwight James Baum, to design the mansion. However, Mable Ringling oversaw the entire construction, ensuring every detail matched her vision. Work on the house began in 1924.

The Ca d'Zan Mansion was completed two years later and cost $1.5 million. The house was named Ca’ d’Zan, “House of John”, in the dialect of their beloved Venice. It was featured in the Country Life Magazine in 1927 and famously called a Venetian Palace in Florida.

The opulent mansion overlooks Sarasota Bay and is a 36,000-square-foot house with five stories, one basement, 41 rooms, and 15 bathrooms. There are stunning views from the stained-glass windows. The dining table could accommodate 22 chairs and was a perfect size for the many parties that John Ringling hosted. A crystal chandelier from the original Waldorf-Astoria Hotel hangs, in the living room, above a black and white marble tiled floor.

The Ringling couple commissioned Hungarian-born artist Willy Pogany to paint murals in the interiors. The house also has an elevator, the first ever elevator installed in a private home in Florida. Besides Venetian Gothic influences, the mansion has Spanish, Italian Renaissance, and Moorish elements.

After John Ringling’s death, the property was neglected and went into decline. However, when Florida State University acquired the museum and the mansion, the university put in $15 million to renovate the house. Renovations were completed in 2002.

When you visit the Ca d'Zan Mansion, you can take a self-guided audio tour and learn more about the history of this incredible mansion. The audio tour is accessible via a QR code.
Image Courtesy of Wikimedia and Roger Wollstadt.

Among other things, the city of Sarasota, FL is renowned for its arts community, historical sites and museums. By far the most notable location that fits all the three categories here is the winter estate of the American circus mogul, entrepreneur, and art collector, John Ringling, and his wife, Mable. Indeed, their 66-acre property, turned museum complex, is one of the Gulf Coast’s premier...  view more

Many of the historical buildings in Sarasota are located in the downtown area and most of them are in the Mediterranean revival style. Some of these buildings were designed by the well-known local architect Thomas Reed Martin. Martin designed some 500 residential and public buildings in Sarasota and had a huge impact on the area's architectural style in the early 20th century.