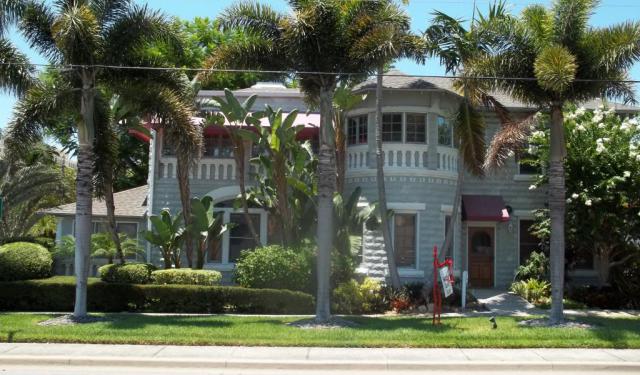 Image by markus941 on Flickr under Creative Commons License.

Most of the historic buildings in Sarasota are located in the Downtown area. They are in the Mediterranean revival style with similar design. Some of them have been designed by the famous local architect Thomas Reed Martin who has had a huge impact on architecture and style. In the following tour you'll get to see some of the first constructions in Sarasota and their initial functions.
How it works: Download the app "GPSmyCity: Walks in 1K+ Cities" from iTunes App Store or Google Play to your mobile phone or tablet. The app turns your mobile device into a personal tour guide and its built-in GPS navigation functions guide you from one tour stop to next. The app works offline, so no data plan is needed when traveling abroad.

The auditorium has been used for many community functions and recreational activities. It has also been known as the Sarasota Exhibition Hall and the Sarasota Civic Center Exhibition Hall. The auditorium is located on a large parcel of public land that is reserved for civic, government uses. On February 24, 1995, the complex was added to the U.S. National Register of Historic Places.

Image by Clyde Robinson on Flickr under Creative Commons License.
Sight description based on wikipedia
2

The design of the Times Building is one of Mr. Baum's most successful; the variety of architectural elements, including the use of three different door types and enframements on the ground floor elevation of the Times Building is particularly effective on a relatively small-scaled building. Following the crash of the land prices and the onset of the Depression, the Sarasota Times newspaper went into receivership. The Times Building was subsequently used as the office of the "Tree-Ripe Citrus Products, Inc. which was owned and operated by Mr. Owen Burns.

Image by Look Up, America! on Flickr under Creative Commons License.
Sight description based on wikipedia
3

The Gompertz is located on First Street and was built in 1920. Initially the building housed the Park-Seventh Movie House. During the Depression the building was closed. Over the years, it housed a number of different businesses like The Playhouse and Asolo Theater. At present, the Florida Studio Theater uses the building for its shows.
Image by srqpix on Flickr under Creative Commons License.
4

Florida Studio Theater or FST was initially the clubhouse of The Women's Club of Sarasota. It was opened in 1915 and is part of a small group of Sarasota Tudor structures. In '79 the club moved out of the building which then housed the Florida Studio Theater. The building is in the traditional Mediterranean Revival style. It is a non-profit theater that produces contemporary plays, with 25,000 subscribers a year, more than any theatre its size in the country. It has been in operation since 1973 and currently serves over 160,000 attendees per year. Its major programs include the Mainstage Series, the Cabaret Series, Stage III, New Play Development, and WRITE A PLAY. The FST campus is a village of theatres and performances spaces. These spaces include the historic Keating and Gompertz Theatres, the Parisian-style Goldstein Cabaret, the John C. Court Cabaret and The Green Room café and bar. FST’s education program offers over 20 classes weekly for both children and adults. Classes are offered each week in theatre, dance and music. FST also provides community outreach programs for the financially disadvantaged, physically and mentally challenged youth and nursing home residents. Florida Studio Theatre provides a Children and Adult Scholarship Program for about 15 percent of all participants with full or partial tuition waivers. The 2012-2013 classes include Play Reading Club, Playwriting Workshop, Sketch Comedy, Adult Acting, Acting for the Camera, Spoken Word and Improvisation. The Florida Studio Theatre Cabaret series opened in 1996 and now houses both musical and improvisation performances. The program focuses on celebrating the lyric poets of our time, as well as presenting social and political satire. The Cabaret caters to the creation of new work and has produced 40 world premieres.
Image by FST15 on Wikimedia under Creative Commons License.
Sight description based on wikipedia
5

The Frances-Carlton Apartments were built in 1920 by Alex Browning, a Scottish colonist. The building was designed by architect Francis James and is in the Classical Revival style. It is named after Browning's wife and son.
Image by Ebyabe on Wikimedia under Creative Commons License.
6

Opening Hours:
Mon-Fri: 10am-5pm, during shows and events
Image by srqpix on Flickr under Creative Commons License.
Sight description based on wikipedia
7

The American National Bank building was opened in 1925 and was actively used during the next twenty years. Also known as Orange Blossom Hotel, it was designed by Francis Palmer and is in the Classical Revival style with a stucco and concrete building.
Image by cmu chem prof on Flickr under Creative Commons License.
8

The Roth Cigar Factory was built in 1923 by Thomas Reed Martin, a famous local architect. It features two floors in the Mission Revival style. The factory was specifically designed to mix well with the surrounding buildings.
Image by Ebyabe on Wikimedia under Creative Commons License.
9

Located on South Orange Avenue, the U.S. Post Office was built in 1934. The building was designed by Louis A. Simon and George Albee Freeman and is in the Classical Revival style with two floors. It was the last building to be designed by Freeman. The building was added to the National Register in 1984.
Image by Ebyabe on Wikimedia under Creative Commons License.
10

Sarasota County Courthouse was built in 1926 by architect Dwight James Baum. It is in the Mediterranean Revival style with Rococo and Baroque elements, two levels, two wings and a central multi-floor section. The building was included in the National Register of Historic Places in 1984.
Image by Ebyabe on Wikimedia under Creative Commons License.