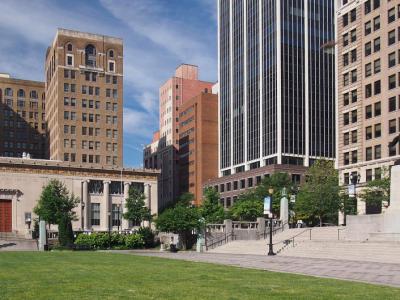 The Caesar Rodney Statue is a large equestrian statue, which has stood in the center of Wilmington since 1923. The square where the statue stands was developed in the early 1900s, and in 1915 it was designated the site of Rodney’s memorial. Th statue honors the American lawyer, politician, and signer of the Declaration of Independence, Caesar Rodney. The statue was rendered in bronze by James E. Kelly, famous New York sculptor. There are two bronze plaques on the statue pedestal bearing the name of Caesar Rodney.
Image by A. E. Crane for the Dept. of Transportation on Wikimedia under Creative Commons License.

This sight is featured in a self-guided walking tour of Wilmington, Delaware within the mobile app "GPSmyCity: Walks in 1K+ Cities" which can be downloaded from iTunes App Store or Google Play. Please download the app to your mobile phone or tablet for travel directions for visiting this sight. The app turns your mobile device to a personal tour guide and it works offline, so no data plan is needed when traveling abroad.

Wilmington boasts an amazing array of historic churches, many of which were established by some of the city's earliest residents. The contribution of multiple immigrant communities is also evident in many of the churches and cathedrals in the city. Take this tour to admire the beauty, diversity and majesty of Wilmington's places of worship.

Founded between the Christina and Delaware rivers in the namesake state of Delaware, Wilmington carries legacy of its first Swedish settlers and the du Pont family who left a great deal of mark on the city's history. Some of the major local landmarks are closely associated with the two. Still, there are more to Wilmington worth checking out. Follow this orientation walk and learn about other...  view more

Wilmington is the largest and most important city in Delaware. It is a city with a rich history and culture that has developed its own sense of identity. Numerous riverfront sites, parks, statues and memorials, bridges, and landmarks contribute to its beauty. Explore some of Wilmington's most notable attractions on this walking tour.

This self-guided tour travels along Pennsylvania Avenue and follows Kennett Pike Road, a historic path that once connected Wilmington and southeastern Pennsylvania. It was once northern Delaware’s principal road, and it is lined with beautiful parks, estates, and gardens. Take this tour to explore northeast Wilmington's treasures.

Wilmington's museums highlight different aspects of the city's culture and history, offering a fascinating narrative of one of the country’s most historic cities. Wilmington’s many art galleries also offer insight into the city's cultural heritage. Take this tour to explore the amazing array of museums and galleries in Wilmington, Delaware’s largest city.

The residential area on Wilmington's north side boasts a number of excellent attractions the whole family can enjoy together. Visit the Brandywine Zoo, the Delaware Children's Theatre, the Soldiers & Sailors Monument, the Delaware Art Museum, and more. Have fun exploring Wilmington with your family on this self-guided tour.