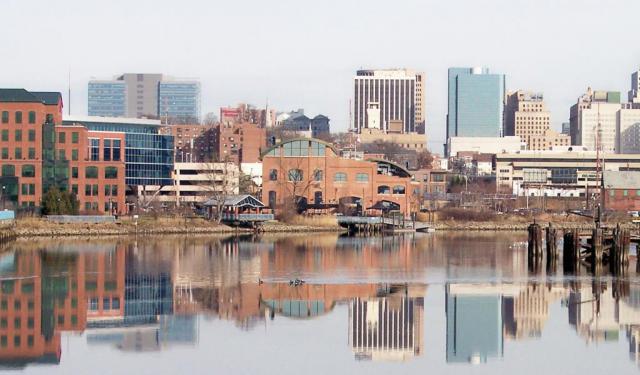 Image by Bjoertvedt on Wikimedia under Creative Commons License.

Wilmington is the largest and most important city in Delaware. It is a city with a rich history and culture that has developed its own sense of identity. Numerous riverfront sites, parks, statues and memorials, bridges, and landmarks contribute to its beauty. Explore some of Wilmington's most notable attractions on this walking tour.
How it works: Download the app "GPSmyCity: Walks in 1K+ Cities" from iTunes App Store or Google Play to your mobile phone or tablet. The app turns your mobile device into a personal tour guide and its built-in GPS navigation functions guide you from one tour stop to next. The app works offline, so no data plan is needed when traveling abroad.

Rodney Square is the public square and historic district in downtown Wilmington named after American Revolutionary leader Caesar Rodney. A large statue of Rodney by James E. Kelly stands in the front of the square. The square was created in the early 20th century by John Jacob Raskob, who worked for Pierre S. du Pont. The City Beautiful movement served as the inspiration for the effort.

In 1917, to make room for the Wilmington Public Library in the square, the 18th-century First Presbyterian Church was moved to Park Drive and the remains in the cemetery were reinterred in Wilmington and Brandywine Cemetery.

It was listed on the National Register of Historic Places in 2011, as the Rodney Square Historic District.

The Caesar Rodney Statue is a large equestrian statue, which has stood in the center of Wilmington since 1923. The statue was rendered in bronze by James E. Kelly, famous New York sculptor. There are two bronze plaques on the statue pedestal bearing the name of Caesar Rodney.

Image by McGhiever on Wikimedia under Creative Commons License.
Sight description based on wikipedia
2

Wilmington Public Building occupies the east side of Rodney Square. It was constructed in 1916 of granite in the Classical Revival style and was designed by New York architect Henry Hornbostel. It originally served as government offices, but since the early 2000s, it has housed the offices of a variety of private companies. The massive, symmetrical, three-story building has two wings. Its main facade features a row of fluted pillars that extend to the cornice. The pillars frame a wide entrance gallery that connects the northern and southern parts of the building.
Image by Janet Richmond on Flickr under Creative Commons License.
3

The Grand Opera House, also known as The Grand or Masonic Hall and Grand Theater, is a 1,208-seat theater for the performing arts. The four-story building was built in 1871 by the Delaware Grand Lodge of Masons to serve as a Masonic Temple and auditorium.

Historically, the Grand hosted a variety of operas, symphonies, Victorian melodramas, minstrel shows, burlesque, vaudeville, and other exhibitions. For most of the twentieth century the Grand was operated exclusively as a movie theater, run by Warner Brothers from 1930 and eventually closing in 1967. It was reopened four years later and returned to programming emphasizing classical music, partnering with the Delaware Symphony Orchestra, OperaDelaware, and the First State Ballet Theatre.

It was listed on the National Register of Historic Places in 1972 with assertions of both architectural and historical significance.
Image by McGhiever on Wikimedia under Creative Commons License.
Sight description based on wikipedia
4

The Quaker Hill Historic District is a national historic district located at Wilmington. It was added to the National Register of Historic Places in 1979, with a boundary increase in 1985. It encompasses 151 contributing buildings in a residential neighborhood west of the central business district of Wilmington.

St. Peter's Cathedral is a Roman Catholic church, which was built in 1816. The cathedral is situated in the heart of Wilmington on West 6th Street. It is small, brick, Romanesque church that has been expanded several times over the years. The main belfry was built in 1829 and has remained unaltered to this day. St. Peter's underwent a substantial renovation in 1870 and again at the beginning of the 20th century. The mural painting, marble baptismal font and altars, bishop's chair, stained glass windows and barrel-domed roof were added during these renovations. Soon after the renovation in 1905, the church was consecrated as a cathedral.
Image by Farragutful on Wikimedia under Creative Commons License.
Sight description based on wikipedia
5

The Old Town Hall is run by the Delaware Historical Society. It is located next door to the Delaware History Museum in the city center. The Old Town Hall was constructed at the end of the 18th century and served as Wilmington's primary political and social institution for about a century. Today, the building has been restored and serves as a venue for special events, exhibitions, and programs throughout the year. This Federal-style, two-story building has red brick walls, arched windows on the ground level, and a simple tower. The Old Town Hall is open to visitors by appointment only.
Image by Smallbones on Wikimedia under Creative Commons License.
6

The elevated tracks of Wilmington's railway system were built by Italian immigrants at the beginning of the 19th century. The Romanesque-style Wilmington Amtrak Station, as well as the nearby Pennsylvania Building and Water Street Freight Depot, were designed by noted architect Frank Furness. The station is located on Front Street along the riverfront, and the tracks follow the bend of the Cristina River. It is listed on the National Register of Historic Buildings.
Image by Smallbones on Wikimedia under Creative Commons License.
7

Tubman-Garrett Riverfront Park is located along the Christina River close to the South Market Street Bridge. It was founded in 1998 to serve as an ideal 2.4-acre location for the city’s celebrations and events. The park was named in honor of Harriet Tubman and Thomas Garrett, prominent abolitionists. This well-arranged, graceful park is designed in the Amphitheater style. It is the perfect place to play and relax alongside the picturesque riverside.
Image by Janet on Flickr under Creative Commons License.
8

Wilmington Riverwalk is lined with an assortment of markets, unique boutiques and art galleries. It is home to outdoor cafes and narrated tours. The marina at the north end accommodates larger vessels, with an outdoor concert venue as well as a restaurant featuring spectacular river and sunset views. One hotel with a roof top view has opened and there is another one currently under construction nearby. The Riverwalk is open year-round, featuring over 200 close-by shops, restaurants and attractions. Conlon Pier is a popular spot for catching views of the river, and is the only spot along the Riverwalk where fishing is allowed. Self-Service public docking is available along the Riverwalk.

Founded between the Christina and Delaware rivers in the namesake state of Delaware, Wilmington carries legacy of its first Swedish settlers and the du Pont family who left a great deal of mark on the city's history. Some of the major local landmarks are closely associated with the two. Still, there are more to Wilmington worth checking out. Follow this orientation walk and learn about other...  view more