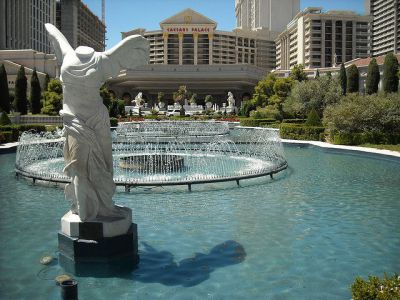 The luxurious Caesars Palace hotel and casino is one of Las Vegas's largest and best known landmarks. From the outset in 1966, this opulent “quintessentially Las Vegas”, yet Greco-Roman in style fantasyland has been oriented to give its guests the sense of life during the Roman Empire. Pursuant to this objective, the complex abounds in statues, columns and iconography typical of Hollywood Roman period productions, including a 20-foot (6.1 m) statue of Augustus Caesar near the entrance.

The hotel has 3,976 rooms in six towers, namely: Augustus, Nobu, Julius, Palace, Octavius, and Forum; the latter features guest suites, each with 1,000 square feet (93 m2) of space. Among the many restaurants found on the site there are several specialized in authentic Chinese cuisine (catering to wealthy East Asian gamblers) and Gordon Ramsay Pub & Grill, styled as an English pub.

Water is heavily used for at least 18 fountains throughout the casino resort — over 240 million gallons a year. One such is The Fall of Atlantis fountain that uses special effects and animated figures to tell the story of the Myth of Atlantis.

A 20 feet (6.1 m) high statue of Julius Caesar hailing a taxi stands in the driveway leading to the entrance; there are also replicas of Rape of the Sabine Women and statues of Venus and David greeting guests as they arrive. Near the entrance is a four-faced, eight-handed Brahma shrine weighing four tons; it was made in Bangkok, Thailand.

The Forum Shops at Caesars, also known as "The Forum", was built as an extension wing of the main hotel and casino in 1992. With many high-end boutiques established here, including Cartier, Chanel, Calvin Klein, Dior, Emporio Armani, Gucci, Ted Baker, Tiffany and Co, Valentino and Versace, this is the highest grossing mall in the United States.

Why You Should Visit:
You’ll get the chance to admire the beautifully done construction, and the statues and forum shops are truly unique. There is a lot to do besides gambling!

Tip:
No matter what hotel you are staying in, it’s worth to have a meal here at least once.
Call your bank before coming here, though, just to be sure to not get a stop on your card :)
Image Courtesy of Flickr and jdnx.
Sight description based on Wikipedia.