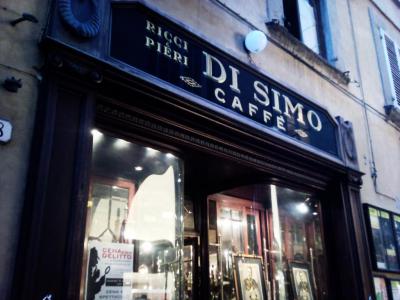 Throughout his life Giacomo Puccini enjoyed close friendship of Alfredo Caselli, owner of a café in Via Fillungo, in the heart of the historic center of Lucca. Caselli inherited this place, along with the adjoining spice shop, from his father Carlo.

A lover and patron of the arts, Caselli was one of the central figures of the Lucchese cultural scene of the 20th century. At some point, his café was among the largest cultural centers of Italian artistic Bohemia, frequented by the likes of musicians Gaetano Luporini and Alfredo Catalani, poets Giovanni Pascoli and Gino Custer De Nobili, painter Lorenzo Viani, and composer Gustavo Giovannetti.

In large part, these prominent personalities, among whom was also Giacomo Puccini, owned their friendships to the café's owner. The relationship between him and Puccini was rather fraternal – Caselli often followed the composer throughout Europe to attend various premieres of his operas.

Presently called the Antico Caffè Di Simo, the joint is largely unchanged from what it used to be 100 years ago, featuring much the same furniture and original decorations.
Image Courtesy of Flickr and Pietro Zanarini.
Sight description based on Wikipedia.