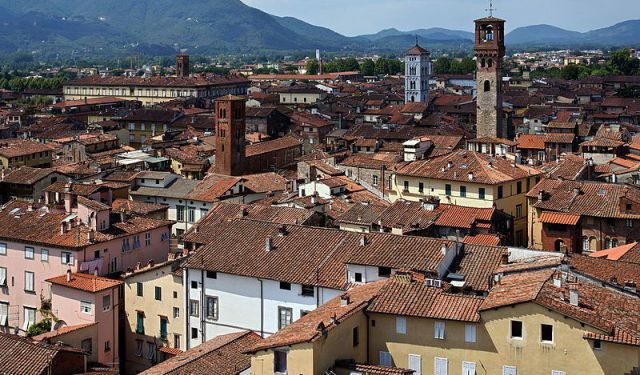 Image by Myrabella on Wikimedia under Creative Commons License.

The Walled City of Lucca is one of the most famous places in Italy because of its wonderful buildings, squares, streets and other attractions. All of these represent its culture and history. This orientation walk gives you the opportunity to see the most outstanding places that Lucca has to offer.
How it works: Download the app "GPSmyCity: Walks in 1K+ Cities" from iTunes App Store or Google Play to your mobile phone or tablet. The app turns your mobile device into a personal tour guide and its built-in GPS navigation functions guide you from one tour stop to next. The app works offline, so no data plan is needed when traveling abroad.

The Piazza San Michele is also known as the Piazza delle Catene due to the typical definition of the square by columns linked by heavy chains. The square is surrounded by Medieval buildings which are easily recognizable for their architectural style with arches and decorated windows. There are also impressive palaces such as Palazzo Gigli. The Piazza San Michele was paved with bricks for the first time in the fifteenth century. Later, in the eighteenth century it was renovated with gray stone and bricks surrounded by columns with chains. The square is home to the magnificent church of San Michele in Foro. In September and during Christmas, different exhibitions are held in Piazza San Michele.
Image by Davide Papalini on Wikimedia under Creative Commons License.
2

2) Church of San Michele (must see)

Notable is the façade, from the 13th century, with a large series of sculptures and inlays, numerous of which remade in the 19th century. On the summit, flanked by two other angels, is the 4-meter tall statue of St. Michael the Archangel. According to a legend, an angel's finger would have a huge diamond. On the lower right corner of the façade is a statue (1480) of the Madonna salutis portus, sculpted to celebrate the end of the 1476 plague. The church interior has a nave and two aisles with transept and semicircular apse; the nave is supported by arcades on monolithic columns. From the southern transept rises the bell tower, built in the 12th-14th centuries, with a series of single, double and triple mullioned windows.

Image by Spike on Wikimedia under Creative Commons License.
Sight description based on wikipedia
3

Casa di Puccini is the place where Giacomo Puccini was born and spent his life. Giacomo Puccini was an Italian musician whose compositions became very popular. The house is located in Corte San Lorenzo in Lucca and was built in the fifteenth century. The Casa de Puccini is now a museum where people can find Puccini’s portraits, sheet scores and other things that the composer used during his life.
Image by Palickap on Wikimedia under Creative Commons License.
4

Lucca's City Walls surround almost the entire city. They was established between the sixteenth and seventeenth centuries. At first their purpose was to defend the city from its enemies. Nowadays, the walls are mostly used as a hiking and cycling area. They also help to protect the city from urban life, keeping it as a pleasant, separate district.
Image by Alex2015Genova on Wikimedia under Creative Commons License.
5

5) The Cathedral of St. Martin (must see)

In the nave a small octagonal temple or chapel shrine contains the most precious relic in Lucca, the Volto Santo di Lucca or Sacred Countenance. This cedar-wood crucifix and image of Christ, according to the legend, was carved by his contemporary Nicodemus, and miraculously conveyed to Lucca in 782. Christ is clothed in the colobium, a long sleeveless garment. The chapel was built in 1484 by Matteo Civitali, the most famous Luccan sculptor of the early Renaissance.

Image by Med Cruise Guide on Flickr under Creative Commons License.
Sight description based on wikipedia
6

The Piazza San Martino is a square located in the center of Lucca. It is the home of Saint Martin Cathedral. There is also the Palazzo Bernardi which was created in 1556 by Bartolomeo Ammannati and a fountain designed by Lawrence Nottolini. The Piazza San Martino is one of the meeting places for the inhabitants of Lucca.
Image by jimmyweee on Wikimedia under Creative Commons License.
7

The Torre Guinigi is the most important tower of Lucca, located on Via Sant'Andrea. This tower, one of the few remaining in the city, is considered one of the most representative monuments. Its main feature is the oaks on its summit. The Guinigi family wanted to compensate for their unkindness by planting trees, which became a symbol of rebirth. By the will of the last descendant of the family, the tower shaft and palace became the property of Lucca.
Image by LivornoDP on Wikimedia under Creative Commons License.
8

Lucca Center of Contemporary Art is located in the Palazzo Boccella, an ancient structure located in the old town of Lucca. The collections are distributed throughout five floors, connected by an elevator and stairs. In this building there is also a café, a bookshop of contemporary books and a lounge where there are temporary exhibitions, wardrobes, etc.
Image by Labarbaraz on Wikimedia under Creative Commons License.
9

The Piazza dell'Anfiteatro was built on the ruins of the ancient Roman amphitheater. The square was made in the Middle Ages and was called "Parlascio", a corruption of Latin paralisium ("amphitheater"); it was said that it indicated the place where public meetings were held. Gradually it was filled with buildings, used as storage rooms, prisons, etc. In the nineteenth century, architect Lorenzo Nottolini decided to remake the urban structure. This is when the “way of the amphitheater” was made. The new place was used for the city market.
Image by Gianni Careddu on Wikimedia under Creative Commons License.
10

Via Fillungo (The Fillungo Street) is the main avenue of the city center of Lucca. The street measures 700 m in length, and 10 m in width. It is among the most representative symbols of the city, center of touristic, commercial, and craftsmanship activities.
Image by Palickap on Wikimedia under Creative Commons License.
11

Torre dell'Orologio is a clock tower, 50 meters in height. It is the highest tower in the city dating back to Medieval times. The tower is characterized by a slender body with two windows below the cell, corresponding to the room where the clock mechanism is placed. The staircase consists of 207 wooden steps. The clock itself is run by a mechanism from 1754. It is a work from Geneva in collaboration with Louis Simon Sigismondo Caturegli. It had Roman numerals, and was then rebuilt and hand shaped with a single star in the centre. The biggest bell announces the hours from one to six, and the other two smaller bells announce the quarters of hours.
Image by Gianni Careddu on Wikimedia under Creative Commons License.