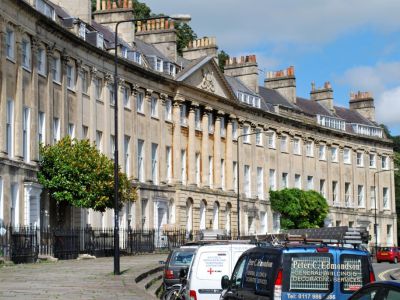 Camden Crescent is located just off Lansdown Road, the main route from the city center into the historic northern suburbs of Bath. The crescent stands on the edge of Margaret’s Hill, an impossibly steep slope that leads down to the A4 and the River Avon beyond. From the ornate railings opposite the main row of houses, visitors can expect a stunning view of the river below, following a brief if steep walk from the eastern edges of the city center. Camden Crescent appears to be perched almost precariously at the edge of the hill, and this perilous placement has lent it a unique architectural feature.

Designed in 1788 by John Eveleigh, Camden Crescent once descended slightly down the hill to the East. A landslide in 1889 caused nine houses to collapse at the eastern end of the crescent, and they were never replaced. As a result, the Grade I listed crescent remains uniquely lopsided. The central pillars, a common feature in symmetrical crescents, no longer sits in the middle of the crescent, but instead leans to the east, adding a quirky feel to this unusual crescent, well placed closer to town than more perfectly formed streets further along Lansdown Road.
Image Courtesy of Wikimedia and NotFromUtrecht.