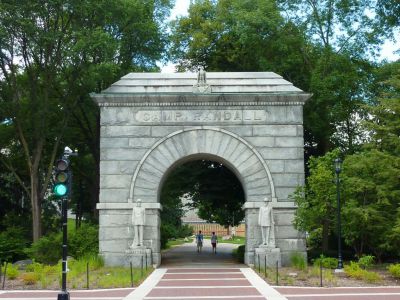 Camp Randall Stadium is an outdoor stadium in Madison, Wisconsin. It has been the home of the Wisconsin Badgers football team in rudimentary form since 1895, and as a complete stadium since 1917. It is located in the south-central region of the University of Wisconsin–Madison campus. It is the oldest and fifth largest stadium in the Big Ten Conference, and the 41st largest stadium in the world.

The stadium received its name because it lies on the grounds of Camp Randall, a former Union Army training camp during the Civil War. The camp was named after then Governor Alexander Randall, who later became Postmaster General of the United States. After an outcry from veterans over plans to turn the site into building lots, the state bought it in 1893 and presented it to the university. Soon afterward, it was pressed into service as an athletic ground. It was originally used by the track and field team before the football and baseball teams moved there in 1895. However, the wooden bleachers were very difficult to maintain, and a portion of them were actually condemned as unsafe in 1914. The university then asked for $40,000 to build a concrete-and-steel stadium, but only got half of the original request. However, after three sections of bleachers collapsed during a 1915 game, the state readily granted the additional money. The new stadium opened for the first time on October 6, 1917.

After the wooden seats burned down in 1922, more permanent seats were added in stages until it consisted of a horseshoe opening to the south, with a running track around the field. The stadium was renovated at various points to raise the size of the horseshoe by nearly doubling the number of rows around the stadium in stages, placing south stands in front of the Wisconsin Field House.

On October 30, 1993, the Wisconsin Badgers football team defeated the Michigan Wolverines, 13–10, for the first time since 1981. As the final gun sounded, students began to charge the fieldto celebrate, but were blocked by the guardrails surrounding the field. The crowd in the back, not aware of what was going on at the front, continued to move forward, now aided by gravity. Those in front were crushed against the rails and then trampled as the throng spilled onto the field. Seventy-three students were injured, six of them critically, though none were killed. As a result, design changes were made in the stadium which increased the size and strength of the fences, along with better training of stadium personnel to handle a field rush.
Image by James Steakley on Wikimedia under Creative Commons License.
Sight description based on wikipedia