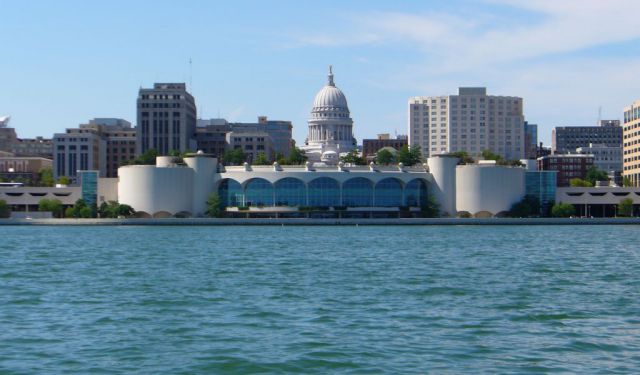 Image by Emery on Wikimedia under Creative Commons License.

The city was named after President James Madison and made the state capital in 1836. Settlers built the University of Wisconsin campus in 1848, the railroad arrived in 1854, and the city served as an important center for the Union Army during the Civil War.

Today, the University of Wisconsin and its hospital and clinics, and the state are some of the top employers. The arts and culture are of significant importance, evident in some of the city's most popular attractions.

The Wisconsin State Capitol, dating to 1917, is the place to see where the legislature, governor, and the state's Supreme Court operate. Dropping by The Wisconsin Historical Museum will help give you a closer look at all aspects of the city and state's history. The Wisconsin Veterans Museum celebrates the lives of veterans from the state who have served in all wars.

This city also has a wealth of cultural attractions, such as Monona Terrace, the site of many musical performances. The Overture Center has a blend of both performances and exhibitions that provide something for everyone.

State Street is the perfect place to find unique shopping and dining opportunities. Memorial Union and Terrace is an ideal place to hang out and relax.

To see some of Madison's most interesting sites, take this self-guided walking tour.
How it works: Download the app "GPSmyCity: Walks in 1K+ Cities" from iTunes App Store or Google Play to your mobile phone or tablet. The app turns your mobile device into a personal tour guide and its built-in GPS navigation functions guide you from one tour stop to next. The app works offline, so no data plan is needed when traveling abroad.

Monona Terrace is a convention center created according to a Frank Lloyd Wright design. The convention center sits on Lake Monona, offering stunning views that visitors will appreciate. Wright's initial design dates to 1938, and the city completed construction, based on his original designs, in 1997. Today, this venue enjoys status as a popular location for concerts and other live events.

The east and west promenade areas are popular locations for exhibitions. Popular features have included a history of Madison, as well as a photo collection dedicated to Frank Lloyd Wright's life. An exhibition on the third floor's gallery featured the journey from the time Wright conceived his civic center design in 1938 to the venue's construction and opening.

Other noteworthy features include a memorial to Otis Redding and a Hall of Fame Room. The William T. Evjue Rooftop Gardens provide a serene place to enjoy a touch of nature. These gardens are also a setting for art, with sculptures.

Image by Nomadseifer on Wikimedia under Creative Commons License.
2

The Wisconsin State Capitol in Madison is host to the state legislature, the governors' office, and the state's Supreme Court. This building dates back to 1917, making it one of the older buildings in the city still used for its original purpose. After a renovation in 2001, the building received Historic Landmark status.

The capital sits on 13 acres, with 154 trees representing over 30 species and 15 flowerbeds containing over 25,000 flowering plants. One of the most important highlights is the Lantern Balcony, which provides outstanding views from a height of over 200 feet. From here, you can see Lake Mendota and Lake Monona, as well as the Downtown area.

The rotunda has unique art, including a bust of former Governor and Progressive figure Robert M. LaFollette, a Liberty Bell replica, Wisconsin veterans' memorial, and glass mosaics. The Supreme Court chamber features original furniture and woodwork, as well as marble from locations as diverse as Italy and Maryland.

Visitors enjoy visiting the Senate and Assembly chambers, which also feature original woodwork and furniture. A Kenyon Cox mural commemorating the construction of the Panama Canal graces the Senate chamber. The Assembly chamber features a mural telling the story of Wisconsin's history, as well as original furnishings.

The North Hearing Room features an elaborate mural celebrating Wisconsin's history as far back as Colonial times. Visitors can see an ever-changing collection of art from the Wisconsin Historical Society in the Governor's Office. The Governor's Conference Room has a Venetian Renaissance style and is known for its ceiling mural about the state's heritage.

Impressive artwork that celebrates the state's past, present, and future.

On weekends and holidays, only 130 people can enter the building per hour so go there early.

Image by Dori on Wikimedia under Creative Commons License.
3

The Wisconsin Historical Museum is a museum that features information about the history of Wisconsin. In addition to Wisconsin history, it provides information about other American history topics through artifacts, photographs, full-scale dioramas, audio-visual presentations, and interactive multimedia programs.

In addition to exhibits about traditional aspect of the state's history, the museum has also offered an exhibition on malted milk, which was first made in Wisconsin, and includes in its permanent collection a Big Boy, the mascot of a hamburger chain, rescued in 1985 when its restaurant closed. The museum also opened in 2012 an exhibit about Butch Vig's Smart Studios, a Madison recording facility that closed in 2010.
Image by Daderot on Wikimedia under Creative Commons License.
Sight description based on wikipedia
4

In the 20th century gallery, exhibits illustrate Wisconsin veterans' roles in the Mexican Border campaign, the First and Second World Wars and also the Korean, Vietnam and Persian Gulf conflicts. Three full-scale aircraft, a Sopwith Camel from World War I, a P-51 Mustang from World War II and a Huey helicopter from the Vietnam War, are displayed in the gallery as well.
Image by Daderot on Wikimedia under Creative Commons License.
Sight description based on wikipedia
5

The Overture Center has five galleries and seven performance venues, making this venue state-of-the-art. One of the things that this artistic space exists for is to make the arts more accessible to the whole community. There are educational programs free to the public offered on a regular basis.

There are hundreds of locally-based artists who exhibit their work here. This performing arts center has ten resident companies providing a variety of performances. In addition to the resident companies, there are also regular performances of Broadway musicals, as well as headline acts. No matter what your preferences, you will find something to see worth your time.

There are concession stands and bars that offer great treats for visitors. Yummy dessert items and savory snacks are favorites that visitors are welcome to enjoy in the lobby area. Beverages that guests may take into the theaters include water, soda, hot beverages, beer, spirits, and wine.
Image by Chief-O on Wikimedia under Creative Commons License.
6

State Street in Madison provides a crucial link between the campus for the University of Wisconsin-Madison and State Capitol Square. This street is a pedestrian mall, closed to car traffic. With this street connecting two of the city's major "anchors", there are plenty of stores and restaurants that are worth your time.

Local boutiques are some of the most popular types of shops represented on this street. Check out some of the great-smelling soaps and aromatherapy products at Soap Opera, find out what record is popular at Jazzman, or see what craft items you can buy at Anthology.

If you feel like grabbing something to eat, there are a lot of excellent options. Try Parthenon Gyros for gyro sandwiches and other Greek specialties, drop by Mackesey's Irish Pub for sandwiches and 14 beers on-tap, or State Street Brats for bratwurst and other local favorites. You won't leave this area feeling hungry.
Image by Neonuevo on Wikimedia under Creative Commons License.
7

7) Memorial Union and Terrace (must see)

Memorial Union and Terrace is one of the best gathering spots in Madison with stunning lake and sunset views. The sunburst chairs are a local icon and provide a great place to sit that is comfortable and perfect for people-watching. Visitors will easily see why this spot is a campus favorite at the University of Wisconsin. Even members of the public unaffiliated with the school enjoy the terrace because of everything that it offers.

This terrace is a great place is enjoy some bratwurst, one of Madison's favorite snacks. There is also beer available, and you'll enjoy the relaxed setting. Another great thing about eating here is that you can also enjoy the popular ice cream from Babcock. This ice cream is a very popular local treat.

Memorial Union is also a major center for popular on-campus activities. Ghost tours often make their way through this part of the campus. Another activity that you might have the opportunity to witness is a scavenger hunt, and either of these two activities is something that you may want to consider. There is usually some interesting going on nearby that s worth your time.

Live entertainment is also popular here, especially during the summer. These artists include student and other local acts, and you're sure to have a great time, regardless. There is also a walking path that goes around the lake. When you take a walk around the lake, you will be able to enjoy some beautiful views in a serene setting.
Image by Richard Hurd on Flickr under Creative Commons License.