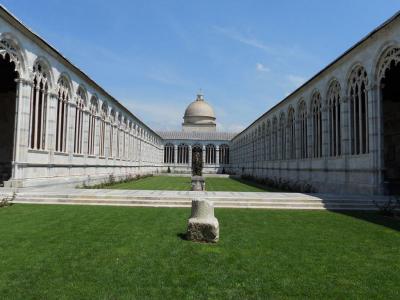 The Monumental Cemetery stands at the northern edge of the Miracles Square and took its name “Monumental” to distinguish it from other later cemeteries. The cemetery is said to have been built around sacred earth brought back from Golgotha in the 12th century by the Archbishop of Pisa, Ubaldo de’Lanfranchi.

According to legend bodies buried here decay within 24 hours. The cemetery was the fourth and last building to be erected on the square and it stands on the ruins of the first Baptistery. It is an oblong shaped Gothic style building started by di Simone in 1278. Building was completed in 1464. At the beginning of its construction, it was intended to be a church, but the plans were changed after the western end was completed.

The outer wall has 43 blind arches and two doorways. Over the right-hand entrance you will see a tabernacle containing sculptures of the Virgin and Child and four Saints, created in the 14th century by Giovanni Pisano. Most of the tombs are under the arches, once there were many Roman sarcophagi, but today only 84 remain.

The building houses three chapels: the Chapel Ammannati is the oldest, dating back to 1360; the Chapel Aulla was built in 1518 and has an altar made by della Robbia; the Chapel Dal Pozzo was added in 1594.

In the Aulla chapel we can see also the original incense lamp that Galileo Galilei used for calculation of pendular movements. This lamp is the one Galileo saw inside the cathedral, now replaced by a larger more elaborate one.

In 1944 American bombing caused a fire which destroyed most of the cemetery’s marvelous frescoes. These were removed and ongoing restoration work began on them in 1954 with the intention of returning them to their original places.
Image by Kaho Mitsuki on Wikimedia under Creative Commons License.