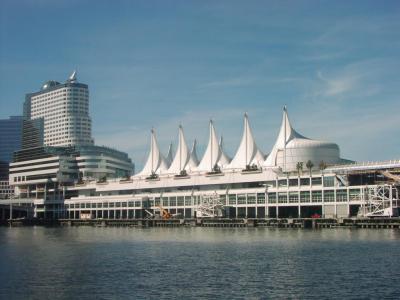 Canada Place is a building situated on the Burrard Inlet waterfront of Vancouver. It is the home of the Vancouver Convention & Exhibition Centre, the Pan Pacific Hotel, Vancouver's World Trade Centre, and the world's first permanent IMAX 3D theater (which ceased operation on October 1st 2009). It is also the main cruise ship terminal for the region, where most of Vancouver's famous cruises to Alaska originate. Construction on it began in 1983, finished in late 1985, and was open for Expo 86 as the pavilion for Canada and was the only venue for the fair that was not at the main site on the north shore of False Creek. The building was designed by architect Eberhard Zeidler.

Why You Should Visit:
This is the epicenter if you're cruising to or from Vancouver, and the walk along the seafront is particularly pretty.
Signage is good to get you to the right place and there are usually plenty of helpful staff around.
Lots of shops & bars in the area and the remainder of the Downtown area isn't too far away – where there are even more bars & restaurants.

Tip:
At the Convention Center, you can see exhibits from the 2010 Vancouver Olympics.
Take Christmas card-quality photos outside at the Olympic Cauldron with Stanley Park and the mountains in the background.
Watch the 'Fly Over Canada' movie, but be sure to pay for your timed tickets in advance over the internet to avoid lines.