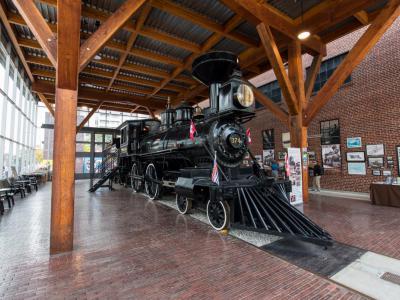 Engine No. 374 is the Canadian Pacific Railway (CPR) locomotive that pulled the first transcontinental passenger train to Vancouver, arriving on May 23, 1887. This was a year after sister Engine No. 371 brought the first train to cross Canada into Port Moody, roughly 20 miles (32 km) to the east.

No. 374 was built in 1886 and was one of eight similar steam locomotives manufactured that year in the CPR Montreal shops. While No. 371 was scrapped in 1915, No. 374 was completely rebuilt in 1914 and remained in service until 1945. Because of its historical significance, it was donated to the City of Vancouver upon its retirement, which placed it on display in Kitsilano Beach Park.

Sadly, the machine suffered greatly from exposure to the elements and a lack of upkeep there. It remained in the park until 1983, when a group of railway enthusiasts launched an effort to restore the engine in time for Expo 86. They moved it from the beach and placed it in different warehouses around Vancouver for the next few years, while a crew of volunteers undertook the task of restoring the engine. Completed in time for Expo, No. 374 was put on display on the turntable at the renovated former CPR Drake Street Roundhouse, where it became a prime attraction.

Now a central feature of the Yaletown area redevelopment, the Engine 374 Pavilion is open daily for public viewing from 10 am to 4 pm.
Image Courtesy of Wikimedia and Ɱ.
Sight description based on Wikipedia.