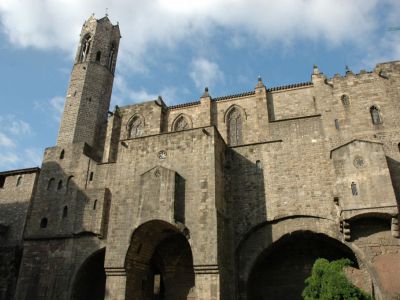 This chapel was constructed in 1302 on orders of King James II of Aragon and his wife Blanca of Naples to adjoin the Royal Palace and replace its old chapel. Built in Gothic Catalan style, the chapel has a single nave with a rectangular apse Polygon, a small cruise to the chapel of the Queens, where you can see the coats of arms of Maria of Navarre and Eleanor of Sicily. On the side of the sacristy is the 14th-century octagonal bell tower complete with eight triangular pediments resembling a royal crown. There also are sixty clay tiles with images of angels and the coats of arms of Aragon and Sicily.

Why You Should Visit:
Another beautiful Catalan monument in the beautiful Gothic Quarter, that should not be missed when visiting the Museum of the History of Barcelona (visits here are included in the entrance price of the MUHBA).

Tip:
Inside, visitors are allowed to take noncommercial photos, only without a flashlight. Don't miss the decorated ceiling timbers by Alfonso de Córdoba, the beautiful Epiphany altarpiece painted by Jaume Huguet in 1465, and the Taule de Santa Agata in the Queen’s Chapel from around 1500. Watch out for temporary exhibitions in both the chapel and the Salò del Tinell, which give access to these buildings without doing the museum tour.