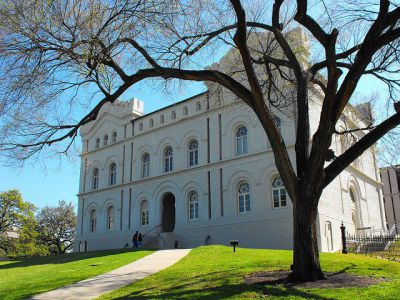 The Capitol Visitors Center sits in the restored General Land Office building which is located in the southeast corner of the State Capitol grounds. Built in 1856-57, it had initially served as the General Land Office until 1918 and, as such, is the oldest state office facility in Texas. The three-story, castle-like structure was designed by Christoph Conrad Stremme, native of Germany, and combined Classical and Medieval elements reflecting architectural trends in his home country.

In the late 1880s, William Sydney Porter, later known as the writer O. Henry, worked here as a draftsman. For three years, he drew county maps for a monthly salary of $100. Porter later used the Land Office Building as a setting for two of his stories, “Bexar Script 2692” and “Georgia's Ruling.”

Over the years, the building underwent series of alterations, including the addition of iron shutters and vaults to aid in the protection of the irreplaceable land records. It received recognition as Texas Historic Landmark in 1962 and became listed on the National Register of Historic Places in 1970. By the 1980s, the building had found itself in a state of disrepair. Due to its architectural and historical significance, the State Preservation Board undertook a restoration of the structure returning it to the appearance circa 1890 when the Capitol was constructed.

In 1994, the building opened as the Visitors Center providing exhibits and programs to educate visitors about the history of Texas, the Capitol and the General Land Office. Over two million people have visited here since.

Why You Should Visit:
To learn about the history and the development of the Texas State, as well as the construction and the everyday activities of the State Capitol.

Tip:
The Center offers free guided, self-guided and specialty tours. Allow about 1.5 hours for this.