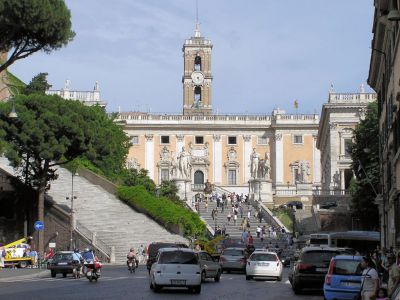 Capitoline Hill is widely regarded to be the most sacred of Rome’s Seven Hills and the one definitely not to be missed when visiting the city. The pillar of Roman civilization, this hill is the site of many temples dedicated to Roman gods, such as Jupiter, Juno, Minerva, Venus and Mars.

Back in the day, it was also a great vantage point to observe battles, especially the unassailable cliff to the south, allowing to view armies marching in every direction.

The views over Rome and the Roman Forum opening from up here are truly dramatic. As a matter of fact, one can easily spend at least half a day exploring numerous attractions of the ancient, Medieval and Renaissance periods on Capitoline Hill. Among them, for example, the 12th century Palazzo Senatorio, 16th century Palazzo dei Conservatori architected by Michelangelo which, together with the 17th century Palazzo Nuovo, make up the Capitoline Museum complex, plus the 14th-century Santa Maria in Aracoeli basilica on the second summit of the hill linked to the ancient Roman Forum by a steep flight of stairs. Another flight, not so steep but wide enough for horses to ascend during triumphal processions, called Cordonata, runs from the Forum down to Piazza dei Campidoglio that was also designed by Michelangelo himself.

Why You Should Visit:
A place where you can enjoy ancient, medieval and Renaissance history, including Michelangelo's significant art and architectural contributions from the 1550s.

Tip:
Amazing views of the city and the Roman Forum from both the museums' plaza and the Vittorio Emanuele II Monument, especially from the top of the latter (via the elevator).
Keep in mind that you may want to dedicate at least half a day, as there a number of magnificent buildings and piazzas located behind the rear of the main building.
Image Courtesy of Wikimedia and Arpingstone.