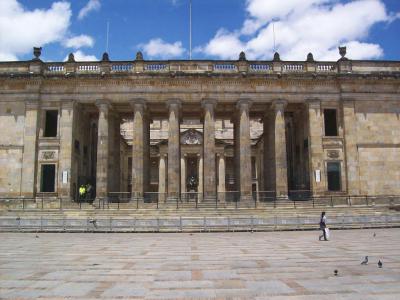 Capitolio Nacional (or The National Capitol) is a building on Bolivar Square in central Bogotá, the construction of which began in 1876, by order of president Tomás Cipriano de Mosquera, and was not concluded until 1926. It houses both houses of Congress of Colombia. In 1947, for the Inter American Conference, Master Santiago Martínez Delgado painted a majestic mural under the commission of the then director of the OEA, Honorable Alberto Lleras Camargo and Conference organizer the Honourable Laureano Gómez--two men who later became Presidents of Colombia. This mural of the Elliptic chamber National Congress Building, made in the fresco style, represents Bolivar and Santander exiting the Cucuta congress during the creation of the Great Colombia. The mural is considered the most important fresco in the country and the artist's main masterpiece.

This sight is featured in a self-guided walking tour of Bogota, Colombia within the mobile app "GPSmyCity: Walks in 1K+ Cities" which can be downloaded from iTunes App Store or Google Play. Please download the app to your mobile phone or tablet for travel directions for visiting this sight. The app turns your mobile device to a personal tour guide and it works offline, so no data plan is needed when traveling abroad.

Zona Rosa is the main essence of Bogota nightlife. Located in the posh north part of the town, Zona Rosa is a huge neighbourhood where all the best clubs, bars, restaurants and shops are concentrated, offering a wide range of entertainment, with the pedestrian Zona T in the very heart of it. There are too many nightspots in which to spend your night out! We're offering a tour though the most...  view more