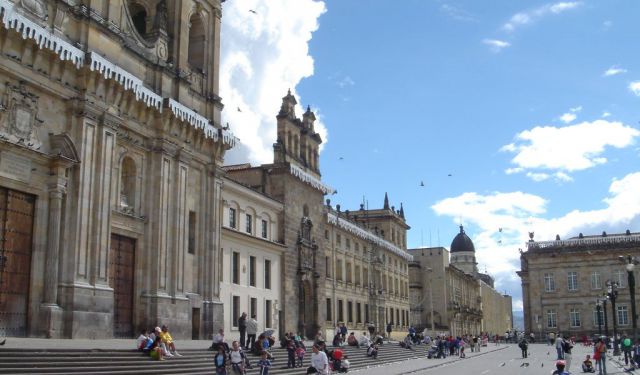 Bogota is quite a city for an architectural experience. Not only did it preserve its architectural and historic heritage, it also managed to maintain most of its colonial buildings and structures in rather good shape, so one can really enjoy their interesting and imposing styles. Take this tour and discover Bogota's architectural jewels.
Image Courtesy of Wikimedia and Jorge Láscar.
How it works: Download the app "GPSmyCity: Walks in 1K+ Cities" from iTunes App Store or Google Play to your mobile phone or tablet. The app turns your mobile device into a personal tour guide and its built-in GPS navigation functions guide you from one tour stop to next. The app works offline, so no data plan is needed when traveling abroad.

Casa de Nariño (Spanish for House of Nariño) or Palacio de Nariño (Spanish for Palace of Nariño) is the official home and principal workplace of the President of Colombia. It houses the main office of the executive branch and is located in the capital city of Bogotá. In 1908, it was dedicated after being constructed on the site of the house where Antonio Nariño was born. The design was made by architects Gaston Lelarge, a French-born former pupil of Charles Garnier, and Julián Lombana. In 1980, the structure was rededicated after the construction of additions. The palace also houses works of art and furnishings from different years. Its garden houses the Observatorio Astronómico de Bogotá, designed by the Capuchin friar-architect Fray Domingo de Petrés and built in 1802-03.
Image Courtesy of Flickr and SC National Guard.
Sight description based on Wikipedia.
2

Capitolio Nacional (or The National Capitol) is a building on Bolivar Square in central Bogotá, the construction of which began in 1876, by order of president Tomás Cipriano de Mosquera, and was not concluded until 1926. It houses both houses of Congress of Colombia. In 1947, for the Inter American Conference, Master Santiago Martínez Delgado painted a majestic mural under the commission of the then director of the OEA, Honorable Alberto Lleras Camargo and Conference organizer the Honourable Laureano Gómez--two men who later became Presidents of Colombia. This mural of the Elliptic chamber National Congress Building, made in the fresco style, represents Bolivar and Santander exiting the Cucuta congress during the creation of the Great Colombia. The mural is considered the most important fresco in the country and the artist's main masterpiece.
Image Courtesy of Wikimedia and Baiji.
Sight description based on Wikipedia.
3

Located on the western side of Plaza de Bolivar in Bogota, Liévano Palace represents French Renaissance style and was designed by French architect Gastón Lelarge on behalf of engineer Indalecio Liévano. The constructions were completed in 1907. The building has three levels and a patio where stands a bust of the hero Santander José Acevedo y Gómez.
Image Courtesy of Wikimedia and Burkhard Mücke.
4

Foundation College of San Bartolome is Colombia's oldest college. It was founded on September 27, 1604 by the Archbishop of Bogota Bartolomé Lobo Guerrero and some Jesuits: Joseph Dadey , Martin de Funes, Coluccini Jaun Bautista Martin Torres and Bernabé de Rojas. The school is home to a Cultural and National Monument and is located at the southeast corner of Plaza de Bolivar in front of congress. The building itself has an important historic and architectural value, being a prominent landmark of Bogota.
Image Courtesy of Wikimedia and Seferaz.
5

The San Carlos Palace, also known as Cancilleria, was built in the XVIth century upon the order of Francisco Porras Mejia, Archdeacon of the Cathedral. The San Carlos Palace has an indisputable and invaluable artistic and cultural legacy accumulated over 400 years of its history. The second floor of the Palace is accessed by a wide corridor of stairs in which a collection of bronze statues sculpted by Italian artist Pietro Tenerani are displayed. The palace is located at the corner of Calle 10 and Carrera 5.
Image Courtesy of Flickr and AlehoPzart.
6

The Teatro de Cristóbal Colón (The Chistopher Columbus Theatre), also known as the "Teatro Colón", is located in Bogotá and it is the nation's National Theatre.

It was built in the Neoclassical style by the Italian architect Pietro Cantini in 1885 and inaugurated on 27 October 1892 on the occasion of the fourth centenary of the discovery of America with a performance of Verdi's Ernani. The auditorium was constructed in the tradition horseshoe-shape and modelled on the layout of the Palais Garnier in Paris, but only about half the size. The Colón Theatre was declared a National Monument on 11 August 1975.

Image Courtesy of Wikimedia and Frank Ballesteros.
Sight description based on Wikipedia.
7

The San Francisco Palace amazes with a sober and elegant Republican architectural style, and surprises even more with its rich and detailed interior decor. The construction of the building lasted from 1918 until 1933 following the project of the Gaston Lelarge. As of 1984, the palace has been listed as a national monument. Currently the building houses the Rosario school.
Image Courtesy of Wikimedia and Felipe Restrepo Acosta.
8

Image Courtesy of Wikimedia and Pedro Felipe.
Sight description based on Wikipedia.
9

Dating back to 1924, the theatre was built on the premises of an old factory called Faenza, hence the name. The building has a very attractive exterior design with an Italian influence. The design also features architectural expressions of 'Art Nouveau' and academic eclecticism of the late nineteenth century.
Image Courtesy of Wikimedia and Tequendamia.