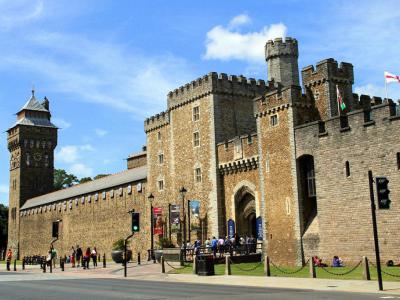 Castle building in Wales started early. The future site of Cardiff Castle was a Roman defensive encampment in 55 AD. By the 3rd century a new fortification emerged. It was Roman again, 635 feet by 603 feet and made from limestone. It was abandoned in the 4th century.

By 1080, forces of William the Conqueror had reached into South Wales. The Normans liked forts. William is said to have built the original Cardiff Castle while returning from a pilgrimage to St David's in 1081. The castle was close to the sea and easily defended.

The 12th century was the time of the Anarchy, with civil strife and bloodshed. The castle passed from Henry II to to the de Clares. From the de Clares it went to the Despensers. During the Wars of the Roses, title passed at last to Prince Henry, soon to be Henry VIII. In 1776 the Bute family acquired the Castle.

In 1868 Architect William Burges was given the job of remodeling. Work started with the 150 foot ashlar stone Clock Tower. It holds a suite of four rooms. The rooms are opulently decorated and gilded. There are murals of the seasons, legends and myths. The floor is a mosaic of the world.

The Guest Tower, the Arab Room, the Chaucer Room, the Nursery, the Library, the Banqueting Hall and bedrooms had been constructed in the 18th century. The Bute Tower includes a roof garden with a sculpture of the Madonna and Child.

Burges redid the castle in a Gothic Revival style. Extensive landscaping was done around the castle. During the 20th century work continued. The Bute lands and commercial holdings were sold off. After World War II the castle belonged to the City of Cardiff.

Today the castle is a tourist attraction and a venue for events, concerts and festivals.
Image Courtesy of Wikimedia and Tevfik Teker.