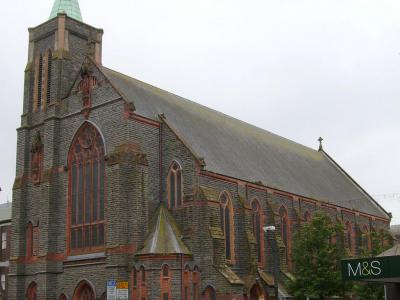 The original church was built at a cost of £2,124 in 1842, after fundraising in Wales and Ireland and a donation by Lady Catherine Eyre of Bath. The current building was designed by Pugin and Pugin Architects and constructed 1884-87. It was Cardiff's principal Catholic church, and it became seat of the Roman Catholic Archbishop of Cardiff in 1916. In 1920 it was declared the Cathedral Church of the new Archdiocese of Cardiff. The Cathedral was destroyed by World War II bombing in March 1941 when incendiary bombs pierced the roof. During the 1950's it was restored and rebuilt, under the supervision of F. R. Bates, Son, and Price and was re-opened in March 1959.
Image by Roger Cornfoot on Wikimedia under Creative Commons License.
Sight description based on wikipedia