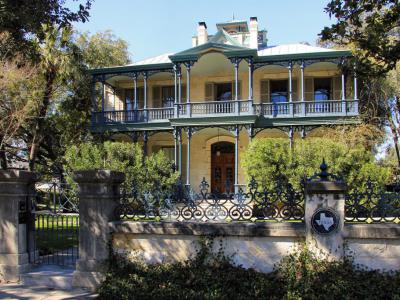 The Carl Wilhelm August Groos House is the former property of Carl Wilhelm August Groos, a German immigrant and one of the founders of the Groos National Bank. He came to Texas in 1848 and in 1854 joined his brothers, becoming part of the freighting firm of F. Groos and Company. In 1862, during the Civil War, Carl was arrested by Confederate authorities and taken to San Antonio.

In 1880, Groos hired the local architect Alfred Giles to build a home for him and his wife Hulda. The result was a limestone Victorian residence featuring a Gothic Revival influence. The Groos descendants occupied this property until 1948.

In 1957, the house was purchased by the San Antonio Council of the Girl Scouts of the USA, which they later sold to Charles Butt. It has since been restored and remained in private ownership. In 1977, the house was designated a Recorded Texas Historic Landmark and listed on the National Register of Historic Places listings in Bexar County, Texas as a contributing structure of the King William Historic District.
Image Courtesy of Wikimedia and Larry D. Moore CC BY-SA 3.0..
Sight description based on Wikipedia.