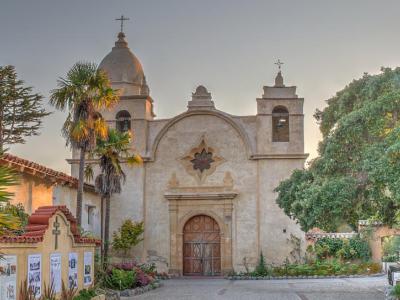 Carmel Mission is a restored Roman Catholic mission church in Carmel Valley. Founded in 1770, the mission was founded by Franciscan missionaries. It was relocated to its present location the following year. Its full name, Mission San Carlos Borromeo del Rio Carmelo, is named for Archbishop Carlo Borromeo and the Carmel River.

There is much controversy surrounding the early days of the mission. Franciscans converted Native Americans to improve their baptismal rates. It is thought that about 900 tribal members were baptized and then forced into labor on the mission grounds during the 18th and 19th centuries. They were starved, tortured and left to die from diseases. This practice is thought to have ceased around 1833 when the church was secularized.

The mission was abandoned and fell into disrepair in the mid-19th century. The roof collapsed in 1852 and the mission was left in ruins. The Roman Catholic church took control of the land once again and rebuilt the mission, and then added to it over the course of several decades. It is said to be one of the most authentically restored missions in California. The mission was designated as a National Historic Landmark on October 9, 1960. It was placed on the National Register of Historic Places on October 15, 1966.

Today, the mission is used as a place of worship and gatherings. Concerts, lectures and art exhibits take place at the mission. Visitors are welcome to tour the museum, find souvenirs in the gift shop and tour the mission itself. They can also attend mass along with the local congregation.

Tips
The museum, gift shop and grounds are open Wednesday and Thursday from 10 AM to 4 PM, Friday and Saturday from 10 AM to 5 PM and Sunday from 12:30 PM to 5 PM. Those wishing to attend mass as the Carmel Mission should consult the website as mass times are subject to change.
Image by Dsdugan on Wikimedia under Creative Commons License.