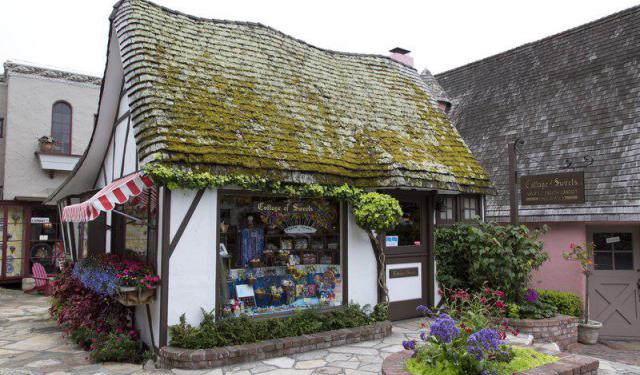 Back in the early 1900s, little about Carmel-by-the-Sea rivaled the appeal of the magnificent ocean front. What is seen now as a quaint, European-like town on the coast of Central California, started off at the turn of the last century with the planting of 100 pine trees right down Main Street – today's Ocean Avenue. This was followed by the arrival of the young architect, Michael J. Murphy, specifically invited to come over and build the city from scratch.

The architectural patterns that shaped the downtown character emerged predominantly in the 1920s and 1930s and were mostly Northern and Southern European–influenced Romantic Revival styles. Mock Tudor, fairy-tale storybook homes, with a touch of medieval influence, give the town its signature charm, while the abundance of Mediterranean and Spanish Revival designs, mixed up with a few Western false-front and Craftsman-style buildings from the start of the 20th century, nicely contribute the eclectic mix.

Here are some of the noteworthy samples of the historic Carmel-by-the-Sea architecture not to be missed:

Cottage of Sweets – a popular sweets store inspired by traditional candy shops in the UK; originally built in 1922 as a weaving shop, then served as a theater box office.

Carmel Art Association Gallery – founded in 1927, the oldest art gallery in Carmel and the second oldest non-profit art organization in the US.

To discover these and other historic buildings in more detail and to see what makes Carmel-by-the-Sea truly unique, embark on the self-guided walking journey!
How it works: Download the app "GPSmyCity: Walks in 1K+ Cities" from iTunes App Store or Google Play to your mobile phone or tablet. The app turns your mobile device into a personal tour guide and its built-in GPS navigation functions guide you from one tour stop to next. The app works offline, so no data plan is needed when traveling abroad.

Cottage of Sweets is a popular sweets shop in Carmel. The inspiration for this shop comes from traditional candy shops in the U.K. Visitors enjoy the quaint cottage setting with its thatched-style roof. This building originated as weaving shop, as well as a box office for the theater that stood behind the cottage from 1923 to 1959.

The shop building was initially built in 1922 on Dolores Street and later transplanted using logs to roll the building to its current location on Ocean Avenue. The distinct look of this historical building has made it a popular local attraction.

What being offered inside the shop is also worth checking out. Some of the highlights of this sweets shop include homemade chocolate and fudge, which are always in high demand. You can also choose from a selection of imported candies and licorice. This store has been consistently named one of the top candy stores in the United States for years.

Visitors can easily stop by this shop while on the way to the beach. Even though the shop draws a crowd, you'll find the selection of sweets worth the time. Most of the sweets sold here are by the pound, allowing you to stock up on your favorite.

Image by Sandip Bhattacharya on Flickr under Creative Commons License.
2

Harrison Memorial Library is a public library located on Ocean Avenue in Carmel. The library is in a historic building designed by architect Bernard Maybeck in 1928. It was financed by Ella Reid Harrison in honor of her husband, California Supreme Court Justice Ralph Chandler Harrison.

The library is unique in that it does not rely on public funding for materials or programs. Private gifts, including a society called the Friends of the Harrison Memorial Library, provide funding that pays for books and supplies.

Visitors to the library can appreciate the architecture of the building, which represents Maybeck's signature Arts and Crafts style. They can also rest on one of the benches outside of the library, which have ample shade and easy access to some of the city's best local eateries and upscale retail attractions.
Image by Daily Bungalow on Flickr under Creative Commons License.
3

Founded in 1927, Carmel Art Association is the oldest gallery in Carmel and the second oldest non-profit art organization in America. It shows a rich variety of art styles, presenting the works of more than 120 prominent Californian artists.

The originator of the plan was Jennie V. Cannon of Berkeley, California, who was a frequent visitor to Carmel and owned a summer cottage there. In October 1927 , the first show of 41 artists took place in the Seven Arts building of Herbert Heron. In 1933, the gallery was moved to its present location on Dolores Street.

One of the first CAA exhibitions was on June 3, 1928 at the Stanford Art Gallery of oil paintings and watercolors by 25 of its members. Jo Mora was active in the Carmel community and served on the board of directors of the CAA, where his sculptures were exhibited between 1927 and 1934. Salvador Dalí joined the CAA. On June 8, 1947, he participated as an art expert and juror in a contest sponsored by CAA that awarded high school students from Albany High School in Oakland, California.

The historic building provides exhibition space for its members' works. Besides photographs and art prints, this gallery has an impressive collection of drawings and sculptures, offering only the finest works, most of them for sale at the gallery.

Fairy Tale Cottages are a series of homes that were designed by Hugh Comstock. Each has the appearance of a fairy tale cottage brought to life. They have uneven rooflines, stone chimneys, ornate metalwork and English-style gardens. The homes are located in the Comstock Historical Hill District.

Comstock began building the homes in 1924. The first was a house for he and his wife, Mayotta Browne, that he called Gretel. The second, a home called Hansel, was built to showcase the cloth Otsy-Totsy dolls his wife made. Soon thereafter, Comstock began designing commercial buildings in the same style. The first of these was The Tuck Box.

The Tuck Box is located on Dolores Street. It is open seven days per week from 7:30 am through early afternoon.
Image by lwtt93 on Flickr under Creative Commons License.
5

Cypress Inn has been in Carmel since 1929 and is the most well-known hotel in the United States that is dog-friendly. The hotel has been co-owned by actress and animal activist Doris Day for over 20 years. Over the years, the hotel has gotten a reputation for being a gathering place for pets and their owners.

The outside of the Cypress Inn features beautiful stone, Mediterranean-style architecture. One of the highlights is a restaurant called Terry's Lounge, which also features an outdoor seating area. Visitors can enjoy an array of Mediterranean-inspired dishes, as well as cocktails and delicious dessert items.

Terry's Lounge is also a popular place for entertainment. Some of the most popular Carmel-based artists perform here on a regular schedule, offering everything from vocals and piano to full bands with guitars and percussion. The atmosphere is relaxing.
Image by Brad Coy on Flickr under Creative Commons License.
6

L'Auberge Carmel is a popular Carmel hotel dating to 1929. It was commissioned by Allen Knight, one of the best known residents in Carmel's early day. Knight initially wanted to create a Bohemian styled residential apartment building similar to what he saw during his travels in Prague. Knight worked with the noted San Francisco architect Albert Far who was also known as the architect of “Glen Allyn”, the first home of Jack London in Sonoma County. The resulted three story wood frame and stucco building has been a highlight in Carmel's architectural landscape since its inception.

Visitors enjoy the hotel's Old World style, as well as the antique furniture and decor. The hotel is a great sight to see as well as a cozy place to stay. One of its main attractions is Aubergine, a celebrated restaurant that boasts Mediterranean-style cuisine and an eight-course tasting menu. The wine cellar boasts 2,500 varieties, featuring wines from Monterey County and around the world. The restaurant staff can recommend pairings course-by-course to help you get the best wines.

Visitors will enjoy the landscaping used for the courtyard. This area provides an excellent place to enjoy Carmel's fantastic weather. Regardless of whether you're stopping to enjoy a meal at the restaurant, enjoying the architecture, or both, you'll find this hotel worth your time.
Image by Carol M. Highsmith on Wikimedia under Creative Commons License.