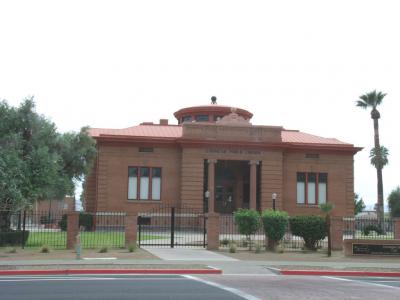 The Phoenix Public Library first began in 1898. It started in two rooms in an office building downtown, and later it moved into Phoenix City Hall after the legislative assembly moved to the capitol building. It was very successful and grew quickly, with plenty of community support. With quite a bit of lobbying and hard work, the library successfully secured a $25,000 grant from Andrew Carnegie, one of the wealthiest men of his time who was a well-known philanthropist.

The library building opened in 1908 and was used until 1952, when the new central library was constructed. It was used for many purposes after that. At various times, it was a homeless shelter, a social service center, a storage facility, and a rec hall. After a considerable restoration in the 1980s, it housed the Arizona Hall of Fame. Today, it is the home to the Arizona Women's Hall of Fame, and it serves as the administrative and museum space for the Arizona State Library.

In 1974, the structure was included in the National Registry of Historic Places.
Image Courtesy of Wikimedia and Tony the Marine.