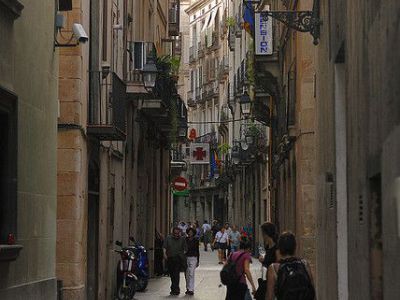 An old street in the center of Barcelona, Carrer Avinyo is famous for the brothel at number 44, which was said to have inspired Picasso’s groundbreaking painting "Les Demoiselles d'Avignon" ("The Young Ladies of Avignon"), which marked the painter's movement toward cubism – a style of art where objects are analyzed, broken up and reassembled in an abstracted form. Creating it changed Pablo's understanding of painting, and though initially not well received, cubism would eventually become one of the most important art movements of the 20th century.

You can still find the former brothel's site on Carrer Avinyo. Nowadays, the area is best known for its numerous restaurants and cafes; however, the typically narrow medieval street has largely retained the magnificent atmosphere of Picasso's period.
Image by Nick Kaye on Flickr under Creative Commons License.