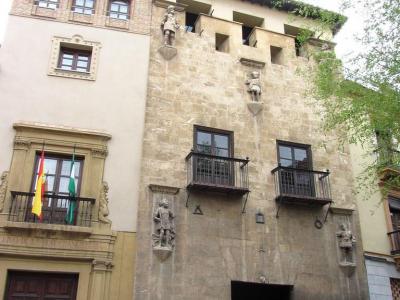 Casa de los Tiros is an ancient fortress built by the Christian conquerors of Granada, and was in use in the sixteenth century, forming the heart of a neighbourhood of alms houses. As peace descending on this often volatile region, it fell out of use and is now owned by the government. For many years, it has served as the town’s main library. The exterior is notable for its tower topped with battlements. The tower still contains muskets and shots, which give the house its name – ‘tiros’ is Spanish for shots.

Inside the building, the main attraction is the Cuadra Dorada, a room with swords carved into the ceiling beams. Beneath the beams stand columns, and between each set of columns you can see a bust of a Spanish king or hero, complete with details of their historic achievements. The library also contains a museum that celebrates the traditional arts and crafts of Granada, from Moorish wood craft to religious artworks. The library and museum are free for EU citizens, but cost 1.50 Euros for visitors from outside the EU.