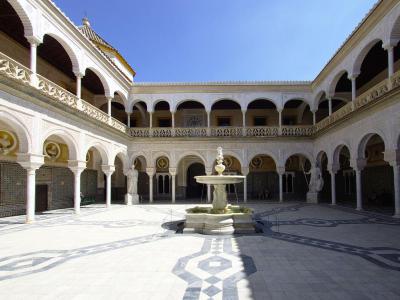 In October 1520, the nobleman Don Fadrique Enriques de Rivera returned from a journey to the Holy Land. Inspired by his experiences in Jerusalem, he initiated in Seville the Holy Way of the Cross. The Holy Way traced the path of Christ from Pilate's praetorian to the hill of Calvary. In this case Calvary was a pillar in a field outside the city walls.

The house of Don Fadrique was still under construction when he inaugurated the Via Crucis and it became known as "Pilate's House." People thought of the house as a copy of Pilate's house. Pontius Pilate is best known for being the official who presided over the trial of Jesus and later ordered his crucifixion. Rooms of the house have names associated with the Passion of Christ. There is "Hall of Praetorian", and "Chapel of Flagellations."

The house is decorated with rare azulejo tiles and surrounded with well maintained gardens. The front gate is of marble in the renaissance style. Beyond the front gate is a courtyard with a fountain and the busts of Spanish kings, 24 in all. There are also a number of busts of Roman emperors. Beyond the emperors and kings are more gardens.

The interiors of the house are decorated with azulejo tiles and ceilings of Mudejar honeycomb design. In a room of the left wing of the tower is a ceiling fresco painted by the Spanish painter Francisco Pacheco. The theme of the frescoe is the apotheosis of Hercules. Hercules is celebrated as the founder of Seville and Cadiz. The house is open year round.

Why You Should Visit:
To see Andalusian design, without the crowds at the Royal Alcázar. The tile work, ceilings, wood, plaster carvings, and colorful gardens are very much worthwhile.

Tip:
Don't miss the cute ceramics shop just outside the Casa; it's an especially good one with some traditional and some original items... better than the regular souvenir shop.