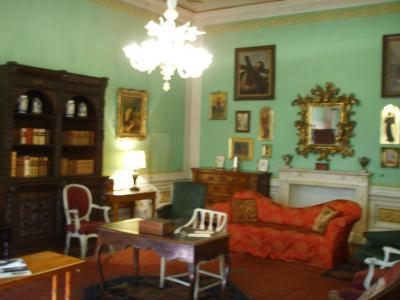 Casa Guidi is a writer's house museum in the 15th-century patrician house in Piazza San Felice, 8, near the south end of the Pitti Palace in Florence. A center of British society in Florence, the apartment was inhabited by Robert and Elizabeth Barrett Browning between 1847 and Mrs. Browning's death in 1861. It is now something of a shrine to Elizabeth, who wrote much of her most popular verse here (including, naturally enough, her 1851 collection of poems, "Casa Guidi Windows").

After Mrs. Browning's death in 1861, their son, Robert Browning continued to live here until 1912. Eventually, the apartment was bought by several Browning enthusiasts – although, by that time, it retained hardly any furniture or paintings. The Browning Society in New York restored it, before giving it to Eton College which undertook further work so that the building could be used as a study centre. Today, it is part of The Eton College Collections but is administered by the Landmark Trust, who also look after the apartment above the one where John Keats died in Rome. When not being used by Eton boys, the property is available for holiday lets booked through the Landmark Trust.

Opening Hours:
Mon, Wed, Fri: 3-6pm (Apr-Nov)
There is no admission fee, but donations are welcome
Image by sailko on Wikimedia under Creative Commons License.
Sight description based on wikipedia