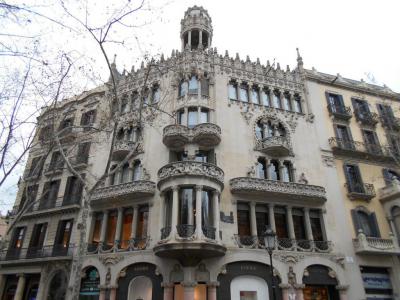 Designed by Lluís Domènech i Montaner, Casa Lleó is one of the three Modernist buildings forming Manzana de la Discordia (the “Block of Discord”) on Passeig de Gràcia in Barcelona; the other two being Casa Batlló and Casa Amatller.

Originally built in 1864, it was renovated in 1902 and appears less extravagant, perhaps, than the other two “casas”, but no less opulent when it comes to the richly decorated balconies and facade. The ground floor of the building, altered years ago, has recently been restored to its original beauty and now looks quite impressive.

Casa Lleó Morera is easily distinguishable by its egg top and profusely ornamented round-shape balcony. Also, at a closer look, you can make out on the facade the illustration of the building's name “Lleó Morera”, which means “lion” and “mulberry” in Catalan. Also, there is a depiction of a light bulb and telephone – the newest inventions of the period – that the author felt obliged to reflect on the facade as well.

The first-floor dining room reveals one of Barcelona’s most stunning interiors. The stained-glass windows, wondrous wood and marble work, complete with the eight ceramic mosaic wall panels depicting idyllic country scenes, make this private house very different from the works of Barcelona's other renowned modernist, Antoni Gaudí. The staircase is also quite unusual for European buildings of the period.

Compared to the widely popular and besieged by visitors Amatller and Batlló houses, a visit to Lleó Morera would be comfortably relaxed, but not boring. There are paid guided tours of the building available, so if you're a passionate modernist or architecture buff, you may consider taking one – you won't regret it!
Image Courtesy of Wikimedia and Canaan.