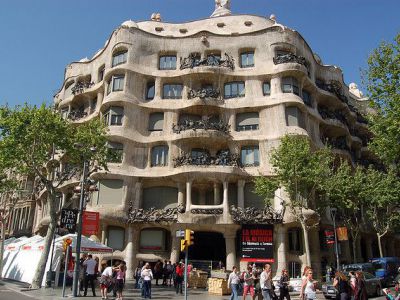 Hugging the corner of Passeig de Gràcia, the curvy Casa Milà is yet another fabulous creation of Antoni Gaudí, located just minutes away from his other masterpiece, Casa Batlló. Commissioned by a rich developer who had just married an even richer widow, this apartment block is the most original in the entire city of Barcelona and vividly illustrates how well ahead of his time Gaudí, the designer, really was.

The nickname La Pedrera (“The Quarry”) stems from the building's stony, fortress-like appearance, but Gaudí himself thought of it more as a body covered with skin, where the columns are the building’s skeleton, and the stone – its flesh. It may not look much from a distance, but as you get near, you are gradually drawn in and can't stop staring! The whole structure is so seamlessly sinuous that it looks as if molded rather than built, while the apartments inside resemble eroded cave dwellings.

After being declared the UNESCO World Heritage Site in 1984, La Pedrera was acquired by a Catalonian banking foundation and, upon the completion of restoration and cleaning works, some of its original decorations came back into sight. The owners also refurbished the building, adding some new features inside.

Among them is a recreated early 20th century-style apartment on the fourth floor, an elegant model of a well-to-do family's dwelling of the period. Up in the attic, there is a tribute to Gaudi’s life and work presented in the form of scale models and plans, drawings and photographs of all his Barcelona creations. Among other things, the display illustrates the master's inspiration found in natural objects such as pumpkins, seashells, and even python skeletons.

In keeping with the building's facade, the roof terrace maintains the peculiar architectural style in the form of chimneys, ventilation shafts and stairwells without detriment to their functionality. Complementing this is a stunning panoramic view of Barcelona and a nice respite from the street bustle down below. If you plan on getting out on the roof terrace, make sure to come on a fine day, for it is closed when it rains.

Tip:
Do try and book your ticket online in advance to skip the queue and, possibly, come at or after the sunset, when the lights are on, so as to appreciate the surreal audiovisual show. In summer months, jazz and flamenco concerts are often held here, which is quite a treat as well!